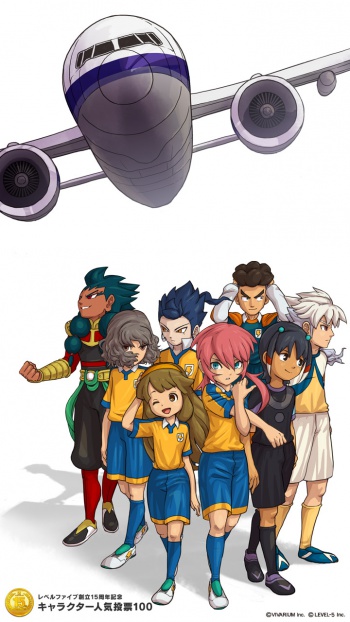 Level 5 has produced an exclusive 15th anniversary wallpaper consisting of the joke characters internet trolls votebombed in an online poll.

Level 5 learned the hard way that you don’t just nicely ask the internet which characters should get an exclusive wallpaper as part of its 15th anniversary celebrations. You would have thought Professor Layton would be right on top of such a list, but after internet trolls got their grubby little hands on it, it quickly turned into a collection of minor and joke characters. The plane from Aero Porter topped the list, with a handful of minor characters from Inazuma Eleven rounding out the top ten. Rather than throw the results out and start a new poll, Level 5 just decided to roll with it, and produced the wallpaper anyway.

An admirable effort from what is quickly becoming our favorite quirky little Japanese developer. Where pretty much every other instance of this kind of thing happening ended up with the organizers sifting through votes to find the actual most popular choices, it’s really cool to see Level 5 just take it in stride.

For your information, the plane managed to amass over 46,000 votes, while second place, pink haired and ponytailed minor character from soccer series Inazuma Eleven: Ranmaru Kirino, snagged over 38,000. Mamoru Endou, the main Inazuma Eleven protagonist, came in at 11th place, while Professor Layton was right down there at 13th place.

Level-5 honcho Akihiro Hino Tweeted that he wanted the vote manipulation to stop, but this only served to spur on the trolls. As part of its 15th anniversary celebration, several Level 5 titles on all of its systems are enjoying discounts on their respective online shops.