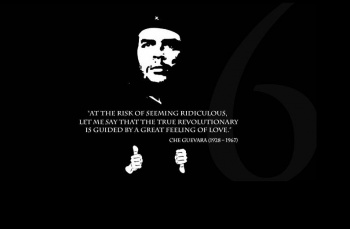 Try to make sense of this one: Peter Molyneux’s Lionhead Studios has put up a teaser splash page with… famous Argentine revolutionary Che Guevara?

Now, Peter Molyneux is known for being a bit of an oddball much in the same way that a brick isn’t very buoyant. Whether it’s making a game where you train a giant monkey monster, or creating a virtual 12-year-old British boy, Molyneux has always marched to the beat of his own drum.

So I suppose if there’s anyone in the industry who might be working on a project involving (in)famous Argentinian revolutionary Che Guevara, it’d be him. Early this morning, the official Lionhead Twitter tweeted … well, just the company’s website.

A trip to said website finds the iconic image of Che (as seen on many a college student’s dorm wall), along with a quote: “At the risk of seeming ridiculous, let me say that the true revolutionary is guided by a great feeling of love.”

Clicking the thumbs up below the image takes you to a page labeled “Followers,” while the thumbs down takes you to “Subjects” – though at the moment, the two pages seem to be identical. I can’t quite decipher what this all means, though perhaps it’s just the idea of a commercial videogame about a famously anti-capitalist revolutionary that boggles my mind.

Oh, there’s also a “6” behind the image, so is probably yet another countdown clock. Whatever it is, we might well expect an announcement at next week’s Gamescom in Cologne.

Sega “Can Take More Risks On The Wii”