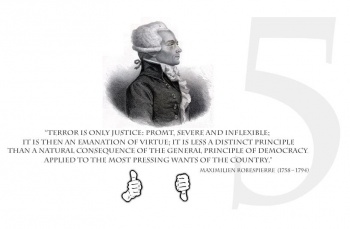 So I guess Lionhead isn’t working on a Che Guevara game after all: The new teaser page now features infamous French leader Maximilien Robespierre, who is perhaps best known for sending lots and lots of people to “Madame Guillotine” before ending up with his neck on the wrong end of the blade himself.

There’s a new quote to go along with it, too: “Terror is only justice: promt[sic], severe and inflexible; it is then an emanation of virtue; it is less a distinct principle than a natural consequence of the general principle of democracy, applied to the most pressing wants of the country.”

Che was #6, Robespierre is now #5, so this does indeed seem to be leading up to a Wednesday morning announcement at Gamescom of some sort. Given the theme thus far – famous revolutionaries – it seems like it’s going to be … well, okay, I have no idea what it’s going to be. It could be a game about famous revolutions through world history. Or it could be Peter Molyneux promising something “revolutionary” (you know, just to change things up for once).

I guess we’ll just have to wait and see for now.