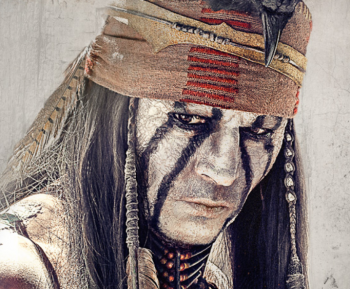 “Everything was perfect on paper,” says Disney exec.

“It’s very disappointing,” says Disney executive VP worldwide distribution Dave Hollis about its blundering blockbuster The Lone Ranger. It’s tanking in the way that only a really expensive failure can, to the tune of a potential $150 million loss. “Everything was perfect on paper, so today was incredibly frustrating,” Hollis added. To put that in perspective, it had a production budget of $250 million and worldwide marketing of approximately $175 million, so you’re looking at something in the region of 35% of the total budget swirling down Johnny Depp’s crapper.

Or perhaps that should be Jerry Bruckheimer’s crapper. Here’s a funny story: once upon a time there were concerns about the amount of cash that was about to be blown on what amounted to a supernatural western, particularly after the not-so-spectacular returns of Cowboys and Aliens. In order to persuade the folks at the House of Mouse that this was still a worthwhile thing, Bruckheimer agreed to pay for a portion of the budget overages – nobody knows the actual split – which means Bruckheimer could be carrying a chunk of this disaster on his shoulders. Bruckheimer’s next Disney project is supposed to be Pirates of the Caribbean 5, a 2015 release.

Currently experts are predicting The Lone Ranger will take something like $125 million domestically. The overseas cash may be more enticing; even Depp’s failures tend to do well – or at least not too badly – in the international marketplace. But Westerns tend to be more attractive to American audiences than anyone else, which could jinx its overseas earnings. It’s impossible to say at this point whether this will be the silver bullet that puts a hole in Depp’s star status, but since his was the most visible face in this implosion of a film, anything’s possible.