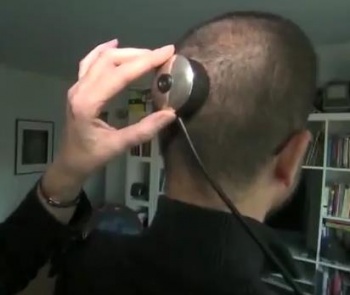 In the name of art, an NYU photography professor has surgically implanted a camera into the back of his head.

New York University photography professor Wafaa Bilal, previously known for his work on a videogame mod called The Night of Bush Capturing: A Virtual Jihadi that cast players as a suicide bomber, is making waves once again. This time, he’s gone and implanted a camera into the back of his skull for a new photography experiment that sounds really painful.

A magnetic camera mount was surgically attached to the back of Bilal’s head by a body modification artist. The artist gave Bilal a “transdermal implant” which includes three titanium plates and posts, which the base for a 10-megapixel camera was screwed into. He says it “hurt a lot.”

Bilal underwent the painful operation for a project called “The 3rd I.” The camera will take photos at one-minute intervals for an entire year and beam them to an exhibit at the new Mathaf: Arab Museum of Modern Art in Qatar, which opens on December 30, 2010. According to his website, the project will begin on December 15.

The premise behind the project is to comment on the “inaccessibility of time and the inability to capture memory and experience,” Bilal says. He adds that he’s interested in “what he leaves behind.” For now this has only been a shower curtain and a bunch of other boring stuff, but he’s sure to capture a lot of interesting moments in the hundreds of thousands of photos he plans to take over the next year.

He could have just worn a helmet cam, but that’d be too obvious to bystanders and wouldn’t work for the premise of the project, it seems. Bilal has agreed to cap the lens of his head camera while on campus at NYU to protect the school’s students, but it’ll be on for every other portion of his life. It’s even waterproof and will work in the shower.

Bilal’s friends are already starting to uninvite him to gatherings because of the camera, but he doesn’t care. It’s an extreme project, but it also has a compelling nature that should see some cool results.