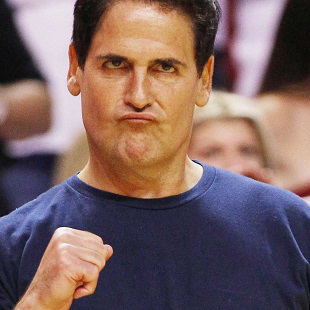 Now that President Obama and the likes of Netflix and Mozilla have firmly come out in support of net neutrality, it’s high time for the opposition to come out with their side of the argument.

Up until now, that argument has come from ISP’s like Comcast and AT&T (providers who enjoy a monopoly of sorts, and want the least amount of government involvement possible), and politicians like Senator Ted Cruz (R-TX), and Congresswoman Marsha Blackburn (R-TN).

So now it’s time for the tech elite to come out on one side or the other, and Mark Cuban is one of the first tech-heavy public figures to come out against Title II reclassification. (And he mananges to do this without making a ham-handed comparison to Obamacare, which is impressive, I suppose.)

Cuban is best known for selling internet radio company Broadcast.com to Yahoo! for over $5 billion in 1999. He also owns the Dallas Mavericks, and serves as a judge on Shark Tank. He’s been tweeting about the issue since Obama’s statement, but his thoughts coagulated bit over the weekend. Venture capitalist Fred Wilson penned a post about net neutrality on Sunday, and Cuban took to the comments to air out his response. Cuban penned several responses in a calm and collected exchange with Wilson, but this is the most telling of them all.

If you want the most open internet possible , with the greatest opportunity for startups, then the threat of title2 or 706 classification will be a far greater deterent than any rule making by the FCC

Once rules are written, the lawsuits will start the battle over how to interpret them Which will probably take years

once there is uncertainty regarding exactly how those rules apply to new technologies and the companies that create them , the incumbents will sue because they believed the rules to mean one thing based on precedent and they want the upstarts playing by the same rules

Look at copyright laws for an example. Ask aereo what they went through. Look at the remote dvr. All common sense enhancements uses of new technology that benefitted only lawyers

Is there any reason to believe it would be any different with FCC rules ? The FCC isn’t certain about their position today. Do you think there will be some Devine clarity that precludes years of lawsuits ?

The FCC can’t and won’t protect the companies you want to protect unless they get very lucky, but they certainly can make their lives miserable and put a serious hurt on innovation.

And it’s here where Cuban raises an excellent point, one that even an ardent pro-net neutrality supporter such as myself will agree with to a certain extent. Government involvement in the net neutrality debate is important, but it’s equally important to remember that involving the feds is rarely a clean, simple affair.

The impacts on patent law, copyright law, and how these laws will be applied to future Internet/communications tech is a very important aspect to consider, no matter which side of the debate you find yourself on.

In other words? Make fun of Senator Cruz’s tweet all you want, but know there is a measured, rational debate to be found within the net neutrality movement.

Dev Who Threatened Gabe Newell is Back with Company Changes