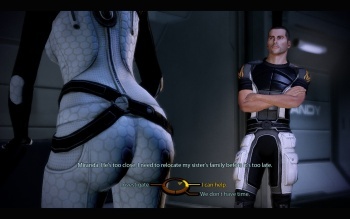 Mass Effect isn’t exactly the most upbeat videogame series ever but BioWare’s Casey Hudson says that as the third part of the trilogy, Mass Effect 3 will have “a lot more humor” than its predecessor.

Let’s face it: Mass Effect is no Armed and Dangerous. The game can be pretty dark at times, particular the second chapter, which begins on a hugely down note and makes it very easy for players to finish in an even worse place. But that’s the nature of trilogies, according to Mass Effect Producer Casey Hudson, and like the final part of all good trilogies, Mass Effect 3 is going to be a little lighter than the previous game.

“We’re not talking too much about Mass Effect 3 right now, but the second story in a trilogy is where you traditionally end up in a fairly dark place. The third story is where you try and bring some fun and lightness back into it,” he said in an interview with OXM.

“One thing we tried to do with Mass Effect 2 was as well as bringing in the more mature stuff, we also tried to bring in a lot more humor so that we can go to these places without making it an overbearing experience,” he continued. “I think we have a lot more fun this time through characters like Joker and EDI. Mass Effect 3 is going to be the epic conclusion… so, a lot more darkness but also a lot more humor.”

But when treated properly, he noted, the “darkness” of a game like Mass Effect 2 can be fun in itself. “You can go too far with the darkness and troubles in your subject matter. But there is a certain amount of fun that comes from the realism of a story, if it resembles a mature movie or TV show and resembles real adults interacting,” he said. “That’s part of what we’re always trying to pursue – how do we bring on the realism and the humanity of the experience?”

Mass Effect 3 is expected to be released sometime in 2011.