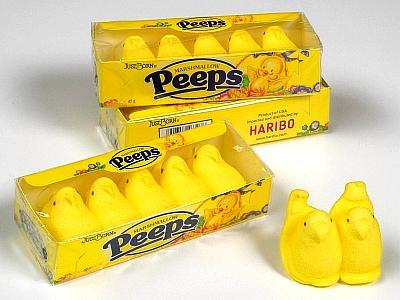 And the “other shoe” drops on the massive success of The Lego Movie. Filmmaker Adam Rifkin, late of Detroit Rock City and Underdog, has optioned the film and TV rights to Peeps – as in, the colored-sugar encrusted marshmallow candies popularly associated with the Easter holiday. Traditionally shaped like baby chicks (hence the name) but also produced in other varieties, the candies are a $2 billion a year moneymaker for Philadelphia-based confectioner Just Born.

According to Rifkin, he was inspired by a Peeps diorama contest being held at his niece and nephew’s school. The pitch, according to Rifkin and his producing partners, would involve a hero Peep who is seperated from its diorama the night before a similar competition and must make its way back by traveling through the other diorama “worlds.” They hope to partner with a larger studio, preferably one that owns the rights to other popular characters who could appear (in Peep-form) for cameos.

Rifkin got his start directing and acting in low-budget horror films like Psycho Cop 2, The Invisible Sex Maniac and The Dark Backward under the name “Rif Coogan,” before transitioning to family and comedy fare as the screenwriter of MouseHunt, Joe Dante’s Small Soldiers, and the caveman comedy Homo Erectus (aka National Lampoon’s The Stoned Age.) He is next slated to direct the “meta-thriller” Director’s Cut from a screenplay by Penn Jillette.