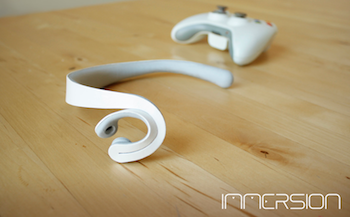 The custom headset makes the game get harder the more stressed you become.

It’s no coincidence that the first studio to popularize the first-person shooter was named after the part of the psyche responsible for aggression and primal desires. In certain circles, the FPS is still referred to as an “Id Shooter”. Especially in a multiplayer environment, these games have the magical ability to transform a normally docile player into an seething ball of hate and adrenaline. Even if you can resist its pull, you still have to deal with a lobby full of raging man-beasts. This got designer Samuel Matson thinking about ways to combat this Jekyll and Hyde phenomenon. Using a headset modified with biometric sensors, he created a game that only gets more difficult the more you rage at it.

Dubbed “Immersion”, the device uses an Arduino microprocessor and pulse sensor inside a custom-designed headset. From there, it feeds your heart rate to a simple FPS game running in the Unity engine. The more stressed the player becomes, the more difficult the game gets. The idea is that players can use it as a way to control their stress, and thus their rage.

The Immersion is just a prototype, so don’t expect anything mass market. However, it’s a pretty intriguing idea. I remember how the (mostly forgotten) Sin Episode used an adaptive AI that would scale with the player. Now, imagine that same idea, only with a game that can smell your fear. Personally, I think this would make a great companion device to Bastard Tetris.