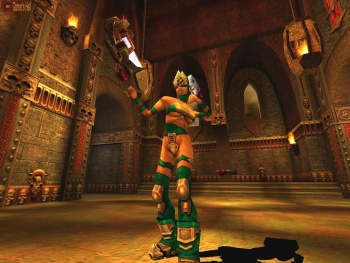 Earlier this month, Notch received a letter from Bethesda’s legal department claiming that Scrolls, the new game in the works at Mojang, infringes upon its Elder Scrolls trademark. The notification demanded that Mojang rename its game or face legal action, as well as “a pile of money up front before the legal process has even started.”

Things have been relatively quiet since then, presumably as the lawyers ply their trade and earn their exorbitant fees, but now Notch has decided to take matters into his own hands, throwing down the gauntlet and challenging Bethesda to settle their differences like men. “Remember that scene in Game of Thrones where Tyrion chose a trial by battle in the Eyrie?” he wrote on his blog. “Well, let’s do that instead!”

“I challenge Bethesda to a game of Quake 3. Three of our best warriors against three of your best warriors. We select one level, your select the other, we randomize the order. 20 minute matches, highest total frag count per team across both levels wins,” he wrote. “If we win, you drop the lawsuit. If you win, we will change the name of Scrolls to something you’re fine with.”

Regardless of the outcome, he said he would still be willing to include a notice somewhere stating that Mojang’s game is not related to the Elder Scrolls series, if Bethesda wants it included. And he’s not kidding around, either. “I am serious, by the way,” he added.

Well, Bethesda? What say you?

Thanks to TheGuy(wantstobe) for the tip.