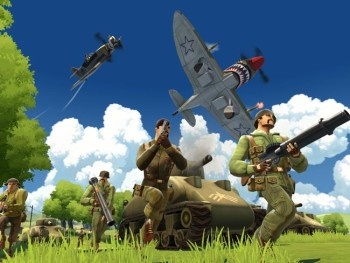 Fans of EA’s free-to-play multiplayer shooter Battlefield: Heroes are up in arms over a “price restructuring” which they say will force them to spend money if they want to continue playing the game.

The quickest and simplest way to acquire items in Battlefield: Heroes is to spend real money on BattleFunds which can then be dropped on in-game equipment, but folks with light pocketbooks (or cheap habits) can accomplish essentially the same thing with Valor Points that are earned through normal gameplay and don’t cost a dime. Or at least, they could; in the wake of yesterday’s price changes, however, that no longer appears to be an option.

The problem, according to most of the gamers who have leaped into the 69-page thread howling outrage over the update, is that while the BattleFunds cost of “many” items have been lowered, all Valor Point items have had their price increased – “substantially” so, according to Ars Technica. As a result, the amount of playtime required to gain just one improved weapon has suddenly become prohibitively high.

“450 VP at a maximum of 7 VP a game, that’s 50 games a day. About 4 hours worth of playing,” one mathematically-inclined player wrote. “Now, when you lose a round you can only get 5 VP, making the amount of rounds you need to play each day to keep ONE weapon about 60, which is about 5 hours playtime, every day, for one Uber/Super weapon.” That may not make a lot of sense to you (it certainly doesn’t to me) but the general idea is clear: You’re going to have to play like a maniac if you want to keep yourself equipped without having to bust out the credit card.

The great potential irony in all this is that the changes were presumably made because EA wanted to squeeze some more money out of the game, yet by pissing off the player base, it could end up with considerably less. Rather than forking over the money, many players say they’ll just walk away from the game entirely. People have a tendency to say things in the heat of the moment that they don’t really mean; the Modern Warfare 2 boycott for a prime example of that particular phenomenon. But Battlefield: Heroes ain’t no MewTwo and EA may have really shot itself in the foot this time.

Interestingly, it was only a few months ago that things seemed to be going fairly well for Battlefield: Heroes. Among players who spent money on the game, the average amount was a healthy $20, three-quarters of which was rather oddly spent on vanity items like hats and sunglasses instead of weapons or other equipment that could actually affect gameplay.