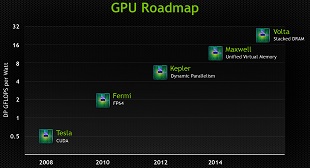 Sweclockers is reporting that Nvidia’s next GPU design will be delayed from late 2014 to some point in 2015.

Currently, Nvidia relies on two major designs in its GeForce graphics cards. Kepler is the chip type found in many of the 700 series GPUs, as well as the Titan line. A newer architecture, called Maxwell, was introduced in the GTX 750 and 750 Ti back in February. These existing Maxwell chips, which are also at the heart of the GTX 800M chips making the rounds in new gaming laptops, are built on a 28nm fabrication, while the Maxwell’s of the future are going to be built with the aforementioned 20nm process.

The reported delay means the next GeForce line — presumably the GTX 800 or GTX 900 series — will be bumped from Q4 2014 into 2015. Sweclockers says there’s a chance of one high-end 20nm Maxwell model being released in 2014 (that line’s equivalent of the GTX 780 ot 780 Ti, perhaps), but there’s no guarantee of that happening.

Scarlett Johansson Controls The Universe in First Trailer For Lucy