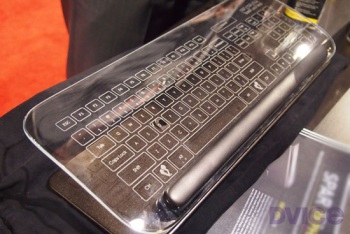 The sexy, see-through sci-fi keyboards of the future are now a real [and really expensive] thing.

Want to be the cool? Want to impress your friends? Want to make sweet music with the ladies? Then what you need is this gorgeous, ultra-futuristic glass computer keyboard that’s guaranteed to make your wheezing, three-year-old Acer look like something straight out of Mass Effect. Or CSI: Miami, if that’s more your thing.

The important thing is that this is a real thing. The “Multi-touch Keyboard” began life as a concept on Kickstarter but has now transitioned to the prototype phase and was being shown off at the 2012 Consumer Electronics Show. It uses an infrared LED to project a light onto the glass and an infrared camera to pick up scattered light particles created by “key presses,” which is how it recognizes where finger meets glass. There’s no tactile feedback, of course – it’s just a hunk of glass – but the keys will be backlit and the nature of the design means that custom keyboard overlays should be a snap.

But really, who cares about how it works? This thing is awesome because it looks like something Joker would poke at while he whips the Normandy around the galaxy and cracks wise with Tricia Helfer. This isn’t the keyboard of the future, kids, this is the keyboard from the future.

First orders of the Multi-touch Keyboard are expected to be available in roughly three months. Alas, it turns out that bringing wildly-impractical sci-fi technology to life is an expensive endeavor, and the initial release models of this bad boy are expected to clock in around $500-$600. It’s hot stuff, yes, but I’m afraid that’s just a little out of my range.