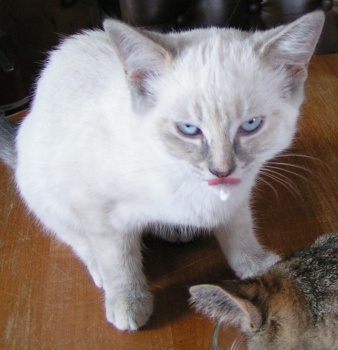 As part of the ongoing quest for artificial intelligence, scientists at IBM have built a computer powerful enough to simulate the brain of a cat, which despite their denials is almost certain to lead to the end of life as we know it on this planet.

True artificial intelligence is the holy grail of computer science. It’s also nowhere near reality at this point, but as one of the baby steps toward that goal, researchers have built a series of increasingly powerful supercomputers that can simulate some or all of the brain of smaller mammals. The most recent breakthrough from IBM is a system that simulates the cerebral cortex of a cat.

The computer uses 147,456 processors and 144 terabytes of memory, yet still thinks about 100 times slower than a real cat. But the benefit comes from the ability to see how thoughts are formed across the roughly one billion neurons and ten trillion synapses contained in a cat’s brain. In one test, scientists observed the computer as it was shown images of corporate logos and determined what they were. Researcher Dharmendra Modha, who called it a “truly unprecedented scale of simulation,” said the work is important because it could lead to computers better equipped to handle a wide range of ambiguous problems without a reliance on the “structured data” required by current technology.

Scientists claim that the computer doesn’t actually think like a cat, which is of course exactly what you’d expect them to say once it became public knowledge that they’d essentially created Skynet with the brain of a furry, fanged messenger of death that likes to kill things for fun. On the upside, it’ll probably spend about 90 percent of its time in standby mode anyway, giving anyone lucky enough to survive the first round of playful kitty-cat Armageddon plenty of time to pull the plug on the thing.

Science!: Vodka Pills, Black Holes and The Pill for Men