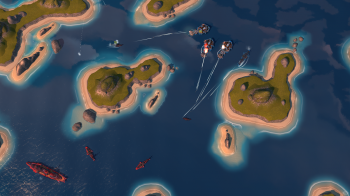 Sink your enemies one turn at a time.

People like board games these days. Taking a turn moving pieces or wheeling deals is occupying more and more of my evenings. The iPad is also a thing – people love those tablets. Paradox Entertainment has decided to take those two trends and smash them together in a game called Leviathan Warships. Up to 4 players can engage in tactical sea battles between slightly sci-fi themed warships. You take turns maneuvering your ships into advantageous firing positions to take out your foes with cannons, rockets and even the occasional ramming maneuver. In addition to the multiplayer, there’s singleplayer and coop campaigns if you don’t feel too competitive.

That’d be enough to entice many tactical players, but there’s more: Leviathan Warships is asynchronous and cross-platform, which means you can make a move on your PC in the afternoon, and then pick up your tablet in the evening, see your opponent’s move, and respond to his aggression in kind. It’s the kind of game where you’ll have multiple games going at the same time, and you can check in with them throughout the day. That is, as long as you don’t have a rival sitting next to you at a demonstration who’s always blowing up your ships right after you make your move. I swear he was cheating – stop looking at my screen!

There’s also a customization system which gives you an impressive level of control in how your fleets are deployed. You can pick from classes of ships like Dreadnoughts or smaller scout ships and even fine tune not only their weapons, but which direction they shoot.

Frontage, or which side of your ship is facing the enemy, is super important, perhaps too much so. In the few minutes I was able to play Leviathan Warships at the Paradox Convention last week, it became important to turn my ships so each weapon could unleash its payload. Each turn takes up ten seconds of game time, and weapons have a cooldown, so to speak, meaning they can’t fire continuously. It took some experimentation to figure out how to maximize the use of my fleet, but I think if I had a greater familiarity with the ship’s armaments I’d have fared much better against my fellow journalists in the demonstration. Alas, my warships made a leviathan wreck on the bottom of the sea.

Leviathan Warships will come out this year on a plethora of platforms: PC, Mac, iOS and Android. Right now, the price point announced was $20 but there were discussions all weekend of how that may change depending on how lucrative addon DLC would be. I personally think it’d do much better selling for $10 or $15. I’m going to wait to pass judgment before I can spend more time sailing the seas and sinking those who crushed me in the demo, but Leviathan Warships may be worth it for me whatever it costs. You can’t put a price on revenge.

Many Frenchmen Die in Multiplayer March of the Eagles Mayhem

The Last Of Us Studio Won’t Tone Down Violence