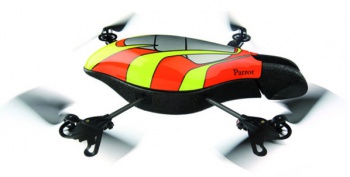 Unlike James Cameron’s SkyNet, this new gadget is not a global, humanity-hating AI. It likely won’t send a volley of nukes at the Russians in a stab at kicking off World War III, nor will it send a nude Robert Patrick back to the mid-90s to hunt Edward Furlong.

I’ve still got my fingers crossed that it comes equipped with a sweet Guns N’ Roses soundtrack however.

This SkyNET, developed by researchers at the Stevens Institute of Technology, is a flying drone that seeks out and attacks wireless networks via its built-in Linux computer system. It has been cobbled together from $600 worth of off-the-shelf tech parts.

Specifically, “a Parrot AR.Drone quadrocopter modded with a lightweight Linux computer, 3G mobile broadband connection, GPS receiver, and a pair of Wi-Fi cards–one for controlling the drone and one for attacking wireless networks,” according to CNet.

“The devious beauty of SkyNET is that by controlling the botnet from a drone rather than an Internet connection, the botmaster is harder to track down. To catch the bad guy you’d have to figure out that a drone is involved, spot the drone, and follow it back to its owner (assuming the black hat goes to pick it up). Either that or catch it and do a full-blown forensic investigation to figure out who made it,” CNet explains.

Notably lacking from any coverage of this drone however, is word on what purpose it might serve. Its a neat idea, but why does SkyNET exist?

I can’t find any government contracts or talk of deploying this gadget alongside law enforcement officials, so why did the SIT researchers build this thing? For that matter, how did they fund its development? Is someone offering grants for robots that exist purely to hack jerks who once wronged them?

Then again, I suppose we should just be happy that this thing isn’t rolling across a field of skulls on gleaming metallic treads.