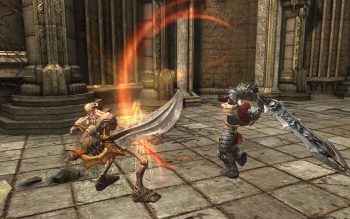 An analyst recently took Darksiders to task as a probable disappointment for THQ, but THQ seems to think otherwise.

THQ’s latest earnings report indicated a positive outlook and an improvement over the developer/publisher’s previous year. According to THQ President and CEO Brian Farrell, THQ made a “significant turnaround … in just one year” due to a new focused, lower-cost strategy bolstered by titles such as UFC: Undisputed, The Biggest Loser (it sold well, apparently), and even Darksiders.

Despite one analyst’s view, THQ’s report says Darksiders has been a strong performer and added it to a list of titles it could revisit in the future. Along with Darksiders, THQ’s list of established franchises includes UFC, WWE (due to a recently settled lawsuit), Saint’s Row, de Blob, Drawn to Life, Red Faction, and MX vs ATV. This does not mean that sequels are imminent, just that THQ is not depositing these franchises in the crapper.

Nevertheless, don’t go thinking Darksiders is the year’s top blockbuster yet. THQ used language that indicated the game either has been or will be profitable, but not quite CoD: MewTwo profitable. THQ’s exact words were that Darksiders “delivered strong commercial sales, with shipments of approximately 1.2 million units in its first four weeks.” Holy hell, 1.2 million units sold? Oh… that says “shipped.” When a company says copies were “shipped,” that normally doesn’t mean the same thing as “sold,” but retailers at least anticipate selling that many copies over the long run. Someone get Best Buy on the phone and find out for sure.

Study Reveals Why “Nerds” Get Bullied