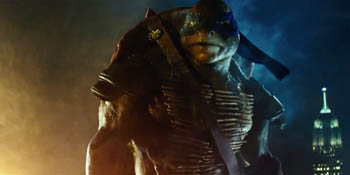 Peter Laird, co-creator of of the Teenage Mutant Ninja Turtles is unhappy about some of the design choices for the Michael Bay-produced movie, but above all he plans to wait and see before making a final verdict.

Peter Laird and co-creator Kevin Eastman birthed the Teenage Mutant Ninja Turtles comic in 1984. Across several decades, the series has taken different turns under different creative directors and artists. With the release of the trailer for the Michael Bay-produced movie, Laird has given his perspective on the redesign of the Turtles – and it’s not glowing praise.

“I was impressed with what I saw of the production values… but the changes to the basic design of the Turtles seemed to me to fall into the ‘fixing what is not broken’ category,” Laird said.

The Turtles originally had a noseless beak appearance. Laird points to Jim Henson’s Creature Shop team’s rendering of the Turtles via rubber and paint as the best live action translation. The Michael Bay’s Turtles, however, have noses and expressive lips. In addition to the color-coded masks, the new Turtles wear additional accessories, such as bamboo armor, goggles, a shark tooth necklace, sunglasses, and a do-rag. Laird finds it all a bit too silly – and above all, extraneous.

“Perhaps it’s just my personal preference, but the ‘noseless beak’ look for the Turtles which Kevin and I used in all of our comics, and in pretty much all of the licensed material during the Mirage days… is, in my opinion, a great way to immediately show that these guys are not human,” Laird said. “They’re mutated reptiles. Creatures.”

Even so, Laird isn’t jumping to firm conclusions yet. “Of course, I could be wrong about the new design – maybe in the context of the movie it will work fine,” he continued. “From what I have seen so far, it is an excellent example of the state-of-the-art character CGI. Perhaps it will become more popular than the noseless style which was used for the first twenty-five years. I guess we’ll have to wait and see.”