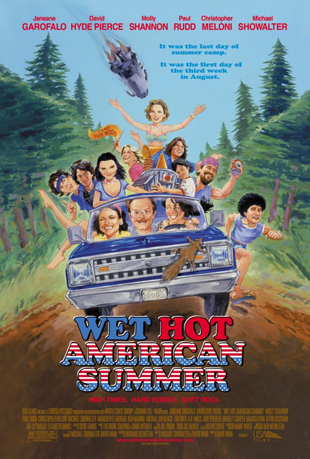 This is really the best possible news.

Well this doesn’t taste like a burger. The previously teased The Wet Hot American Summer prequel is a go. Deadline is reporting that the follow up to the 2001 cult classic is getting an eight episode miniseries on Netflix, to air in the near future, and that filming began this week.

The original film, a parody of the summer camp genre popular in the late 70s and early 80s, functioned as an unofficial reunion of the 90s sketch comedy group The State. Taking place in 1981, on the last day of a fictional Jewish summer camp, set to close for the summer, it’s based around two principle jokes: 1) that all the teenaged counselors are played by fully grown adults, all of whom look far too old for the roles, and 2) despite taking place on a single day, and entire summer’s worth of events happen.

The film also featured an incedible cast. The State alums Ken Marino, Michael Showalter, Joe Lo Truglio, and Michael Ian Black appeared, along with Janeane Garofalo, David Hyde Pierce, Molly Shannon and Marguerite Moreau, plus Paul Rudd, Zak Orth, Elizabeth Banks, Christopher Meloni, H. Jon Benjamin, Bradley Cooper and Amy Poehler years before they became household names. The mini series, as described by Director David Wain in 2012, would take place earlier in the same summer, using the same actors in the same roles, playing themselves a month or more younger. Deadline is reporting, by the way, that the original cast will indeed return. And I can check off something from my bucket list.

I’d wonder if the cast and crew can make lightning strike twice, but of course the couldn’t do it the first time. A complete flop when it was released in 2001, it was skewered by critics and made only $300K in theaters. Fortunately, on video the film was appreciated for what it is, and is now regarded as a modern classic.