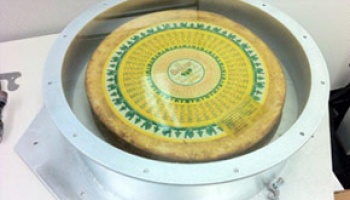 A large wheel of cheese was a secret stowaway on the first commercial spacecraft recovered from orbiting the Earth.

The SpaceX Dragon, a commercial spacecraft launched into low-grade orbit this week for about three hours, was carrying more than dreams of commercial spaceflight: It was carrying a huge wheel of cheese. The round of Le Brouere was bolted to the floor, and arrived home safe and tasty after the capsule’s successful splashdown in the Atlantic.

Elon Musk, SpaceX’s co-founder, suggested that the curdy cargo was a tribute to Monty Python, particularly the troupe’s famous “Cheese Shop” sketch. The gesture retroactively makes the sketch somehow funnier, in that now even commercial spacecraft has cheese, but the cheese shop still has none. CNN quotes SpaceX spokeswoman Kirstin Brost as saying the cheese is doing well, and is “basking in the glow of being the first cheese to travel to orbit on a commercial spacecraft.”

The cheese-carrying flight was the first under NASA’s Commercial Orbital Transportation Services, which exists to facilitate the transport of commercial supplies to the international space station. Supplies like cheese, one hopes.