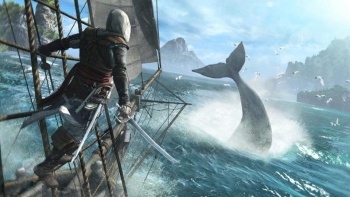 Ubisoft doesn’t believe it should punish legitimate customers with DRM.

Somewhat ironically, Ubisoft’s VP of digital publishing Chris Early has just come out with a very strong anti-DRM stance, denouncing the practice by stating that it is ineffective at halting piracy, and only serves to punish legitimate customers.

“I don’t want us in a position where we’re punishing a paying player for what a pirate can get around,” he told Game Spot, adding “Anything is going to be able to be pirated given enough time and enough effort to get in there.” Instead, Early says that the best way to combat piracy is to simply create quality, easily accessible games, that makes gamers want to buy, rather than pirate, them.

So the question becomes, what do we create as services, or as benefits, and the quality of the game, that will just have people want to pay for it?

Early stated that while Bethesda’s recently released Wolfenstein: The New Order was reportedly pirated over 100,000 times, it was a mistake on Bethesda’s part to say that these were all lost sales, because some number of people were always going to steal the game.

Early says that key to stopping piracy is to offer online services (such as multiplayer) that are simply unavailable for pirates to access. “I think it’s much more important for us to focus on making a great game and delivering good services. The reality is, the more service there is in a game, pirates don’t get that,” Early said. “So when it’s a good game and there’s good services around it, you’re incentivized to not pirate the game to get the full experience.”

Mario Kart 8‘s “Mercedes-Benz” DLC Coming to The US