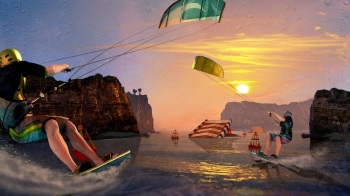 Roughly three years ago, Ubisoft acquired the Vancouver-based studio Action Pants, which at the time employed more than 110 people and was working on a Wii-exclusive sports game. The publisher said, apparently without irony, that “this synergy will provide all of our staff with new and exciting opportunities, as well as resources that will benefit all of our future products.”

But things apparently didn’t work out quite as planned, as Ubisoft has announced that the studio, rechristened to Ubisoft Vancouver, is closing down. Full-time staff had already been cut to 75 and its most recent work, according to Develop, had been reduced to creating assets for games being made by other Ubisoft studios. Its previous games included Pure Futbol, Motionsports Adrenaline and Academy of Champions: Soccer.

“Ubisoft confirms that we have made the difficult decision to close its studio in Vancouver,” a Ubisoft rep told Game Informer. “Unfortunately, we haven’t found the right formula for success for the talented team there. We thank our Vancouver team for their hard work and the projects that they have delivered.”

The rep added that employees at the studio will be given the opportunity to “consider” positions in other Ubisoft studios, of which there are many, including three remaining in Canada. “We will work with each of them to help find the next best step, whether it be within Ubisoft or outside,” the rep added. As always, we wish the best to everyone affected by the closure.

Alienware Blurs the Line Between Console and PC