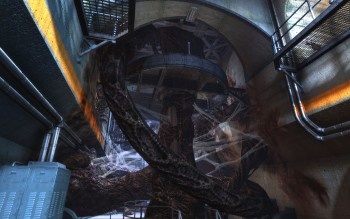 Tramell Isaac, a former artist at 3D Realms has posted a handful of unreleased Duke Nukem Forever renders on his personal blog.

“2 year 9 months. Now it’s over,” Isaac said. “It was fun while it lasted. I worked with an extraordinary bunch of artists, designers, and programmers. You will all be missed. I know we will cross paths again.” Previously, he had served as the art director on Neverwinter Nights 2 and Planetside and also worked on games including Icewind Dale, Descent to Undermountain and Fallout 2.

The art is solid and admittedly just empty backdrops but to be honest I don’t find myself overwhelmed with awe. After 12 years in development I would think they’d have a little more to show for it than screens that could’ve been lifted directly from Prey. Am I expecting too much? Hard to say at this early stage – the fallout from the great 3D Realms swindle is only just beginning – but I have to admit that I’m starting to get the feeling I’ve been cheated.

See them all for yourself at Tramell Isaac’s personal blog, Talkin’ Real At Ya.

Blood on the Sand Sales Disappoint