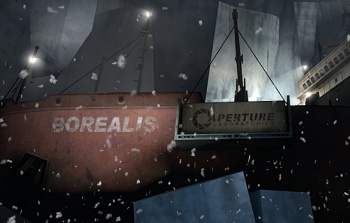 A rumored leak that suggested Valve had been working on a proper Half-Life 3 is just a rumor after all.

Half-Life fans have been waiting in vain for a new game in the series ever since 2007’s Half-Life 2: Episode 2, and with Duke Nukem Forever finally on shelves, Episode 3 is well poised to take its crown as gaming’s most infamous vaporware.

Half-Life fansite Lambda Generation unearthed a post on the Steam forums from a user named ryuuk, who claimed to have uncovered evidence that Half-Life 3 was in development via the resume of a former Valve staffer.

The post, titled “Half-Life 3 is officially confirmed!” read as follows:

Mike Dussault, a long time programmer at Valve, recently left the company. I didn’t know him until last week. Let me introduce myself. I’m a freelance artist. I do contract work for a studio in Seattle, through the internet. They have a client access system on their site. I came across Dussault’s resume, while browsing the files section. Now, I know you’re all curious about Valve’s in-house development, but I’m only going to talk about the Half-Life series.

According to his resume, Episode Three was put on hold when Valve decided to move away from the episodic model in late 2007, right after Episode Two’s release. He was a techinal advisor on a cancelled Half-Life title, made outside of the company. Dussault’s work on Half-Life 3′s world programming, and the scripting system (between 2008 and 2010) is also mentioned in the resume.

The thread was deleted shortly afterwards, and ryuuk was permanently banned from the forums, which – in the eyes of some – made it all the more legitimate. Lambda Generation also confirmed that Mike Dussault was in fact a long-time employee with Valve and had left the company in 2010, dovetailing with ryuuk’s story. While it was circumstantial evidence, it was enough to make some believe the story as the gospel truth.

Unfortunately, it ain’t. Valve’s Doug Lombardi didn’t mince words in a statement to Game Informer. “This is fiction (aside from the fact that Mike D is a real person).”

Ah well, better luck next time, Valve fans. Meanwhile, Gabe Newell pauses for a moment to laugh at the Half-Life devotees from the top of his iron fortress in Bellevue, before going to swim in the money bin from Steam revenues.