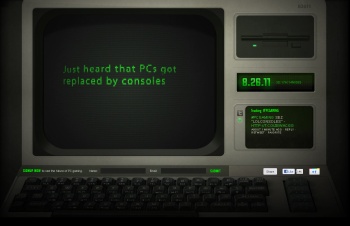 Peripheral maker Razer has a full-page ad in the Wall Street Journal as well as a website promising to prove on August 26 that PC gaming is not dead.

The whole “PC gaming is dead” thing has been pronounced and debunked so many times over so many years that I don’t think anyone takes it too seriously anymore. It’s still a good way to bring the mouse-and-keyboard crowd out in defense of its favored platform, though, as the existence of things like Steam and the growing significance of digital distribution has done nothing to soothe the raw nerve of platform envy that glows red every time someone even looks at it wrong. Or at least that’s the best explanation I can come up with for the vague, and vaguely aggressive, full-page ad that Razer recently took out in the Wall Street Journal.

To Our Friends Xbox, PlayStation and Wii,

We have all heard the rhetoric about the demise of PC Gaming – the stories that console gaming will take over all gaming and that PC gamers will be left with shoddy ports of console titles.

The rumors of our untimely demise have been greatly exaggerated. We are more than 300 million PC gamers worldwide and this legion is growing every day. Today there are more PC gamers than all console gamers combined and we have been silent in the face of the closed gaming systems that have been propagated.

We, the PC Gamers, have been here since the beginning and have seen the industry grow to surpass movies and music, and we look forward to an open world where console and PC gamers will stand side by side as gamers in arms.

We are here today to tell you, that on the 26th of August, we will seek to end the silence and bring a new age of openness and innovation to all gaming. Together we shall remind you – that PDC Gaming is NOT dead.

The ad also includes a URL, pcgamingisnotdead.com, which leads to an image of an old TRS-80-style desktop computer that delivers a spoken message very similar to the Wall Street Journal ad and also displays a countdown timer, slowly ticking its way down to August 26. There are some competing theories about what Razer has waiting for zero hour: GameSpy thinks a line of gaming PCs is on the way, while Kotaku has put its money on the release of the Razer Switchblade.

It’s all in good fun, I suppose, but does this come across as a little silly to anyone else? I’m as die-hard a PC gamer as anyone and I certainly don’t mind tweaking the noses of the button-mashers every now and then, but the idea that we need a big announcement to tell the world that the platform is still alive and kicking feels awfully dated. Is anyone still actually losing sleep over this?