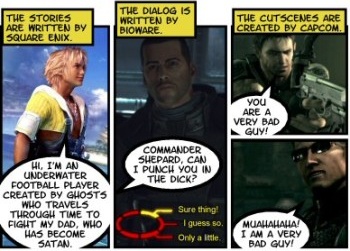 In an interview with GamesIndustry yesterday, Deus Ex: Human Revolution lead writer Mary De Marle said she was “kind of mad” about the WGA game writing awards because of the requirement that nominees must be Guild members. “To tout themselves as, ‘This is the award that you want to get if you write in games,’ that is not true, because they’re not recognizing all the games that exist,” she said.

Her comment elicited a rather lengthy response from Wright, who emphasized that non-Guild members are in fact eligible to compete. Entrants are actually required to join the Videogame Writers Caucus, “a volunteer organization made up entirely of working videogame writers” that costs $60 per year to join and does not have the federally-supervised contract requirements of the WGA. Nominated games must also have a credited writer, which Wright said was part of the group’s effort to force developers to recognize the importance of the work.

“As a guild of professional writers, we’re not about to give an award to either a mystery person, or to a company which can’t be bothered to honor the workers who made their game. Last year only two games were denied entrance due to this requirement… down from over two dozen who weren’t eligible the first year we gave out the award four years ago,” he said. “Mission accomplished!”

More to the point for gamers who wonder why God of War 3 and The Force Unleashed 2 are up for awards this year while other, perhaps better choices are not, Wright said some studios just aren’t willing to turn in scripts for consideration. “Bioware, for example, refused to submit a script for either Mass Effect 2 or Dragon Age this year, and that’s too bad, because both games would have likely been finalists,” he explained. “Similarly, Take Two Games refused to submit a script for Red Dead Redemption. Why? We don’t know. Maybe they hate unions, or maybe they just hate winning awards, or maybe they have enough statues on their mantle. No way to know. So another game gets what would likely have been their nomination. Are we happy about it? No… but rules are rules and our rules are clear and very fair.”

Wright also said that the Writers Guild would have happily welcomed De Marle’s Deus Ex script and even suggested that it had a good shot at winning, although he managed to work a little bit of a backhand into his compliment. “Anyone is allowed to submit for our award. If Mary De Marle wanted to submit the Deus Ex script for our award this year, she could have, and we would have loved to have her,” he said. “And she might have even won it since the guys who wrote Red Dead Redemption took themselves out of consideration this year.”

The 2011 Writers Guild Awards will be handed out tomorrow, February 5, at events in Los Angeles and New York.