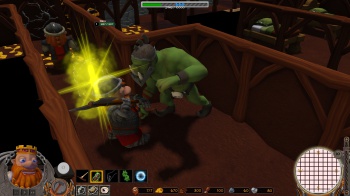 Dwarves, so the stereotype goes, are a simple folk: short, thick, hairy, subterranean, good with their hands and ragingly alcoholic. As a Dwarf prince in A Game of Dwarves, you’ll put those qualities to work to build and maintain underground colonies, keep your people fed, safe, busy and boozed up – and maybe, someday, to reclaim the long-lost glories of the old Kingdom.

A Game of Dwarves is a real-time strategy-management simulator set in various offshoots of the underground realm of Hemfort. As a layabout son of the King of Dwarves, you’ve been sent out on your own to prove your worth and expand the boundaries of the once-great Dwarven nation, which has been reduced to a tiny fraction of its past grandeur by a great war with mysterious, evil mages and their wicked minions. As sinister as it sounds, A Game of Dwarves is played for laughs, a fact made clear from the get-go by the charmingly amusing animated intro. But the story doesn’t mean much either way, aside from a justification for escalating challenges, and the game is really more of a sandbox for people who dream of building and ruling their very own Khazad-dum but don’t have the stomach for Dwarf Fortress.

A Game of Dwarves is played from a variable isometric perspective, with conventional camera controls that allow players to raise, lower, rotate and zoom the view. Keyboard functions are supported but just about everything can be controlled more easily via the mouse. The biggest weakness of the camera controls is the inability to look up, which can be problematic when you’re tunneling vertically. The game allows players to dig up or down as well as along the directions of the compass, but doing so with any sort of precision can be tricky because it’s difficult to gauge precisely where your diggers are going to put pick to earth.

The game’s visuals are sufficient to get the job done but nothing that will bring a tear to anyone’s eye. Textures and models are reasonably sharp but not particularly detailed, and as the world you dig through is essentially a three-dimensional grid, your warren is restricted to right-angled designs. The music is somewhat better and subtle enough to avoid becoming a distraction, but voice work, beyond a few random lines of dialog that serve only to alert you to the fact that someone is speaking, is non-existent.

Despite being cubically contained, you have a considerable amount of freedom with which to work. You can tunnel as far and as deep as you want, at least until you hit the impenetrable granite that borders your potential kingdom, and as you advance further into the game and unlock more of the tech tree, a wider variety of fixtures and furnishings becomes available. Most are fairly obvious in their function – beds, food tables, research stations, that sort of thing – but you’ll also be able to unleash your inner Dwarven designer with a range of items that are purely decorative. Even those serve a purpose, helping keep your delving denizens happy and productive.

The biggest downside to ruling a clan of Dwarves is that your people aren’t very bright. They’ll take care of themselves for the most part, eating and sleeping as needed and carrying out your will in between, but they’re prone to falling victim to their own lack of planning. They can sleep anywhere, although sleeping on the hard ground doesn’t leave them nearly as well-prepared for a big day of work as a good night in a proper bed, but if they wander too far from a food table or are prevented from reaching it when they’re hungry, they won’t ask someone to bring them a sandwich – they’ll just starve to death.

They behave with a similar level of sharpness in other ways as well. Food and wood are both harvested from your underground garden, but you can’t assign workers to any particular crop and they’re just as likely to cut a vast and entirely unnecessary hoard of lumber as they are to harvest the food your colony needs to avoid starvation. Occasional bits of micromanagement, like placing a fruit tree directly in front of a worker to impress upon him the need to pick the damned thing, do appear necessary to compensate for clunky AI.

Dwarves are recruited through the “spawning pool,” a magical conduit between your new colony and the last great Dwarven city of Hemfort. Each new dwarf begins as a “dwarfling” and can at any time be assigned a particular class, like digger, worker, warrior or scholar. Dwarflings in their unassigned state are a drain on the colony, eating, sleeping and contributing nothing, but unlike their more mature brethren, they gain experience simply by existing. That effortless growth means that bringing in dwarflings and suffering their laziness can give them a big head start with whatever role they’re ultimately assigned; just make sure they don’t eat you out of house and home first.

It’s easy to fall prey to that and other sorts of unpleasantness, because A Game of Dwarves doesn’t do a whole lot to let you know when bad news arrives. Stats like dwarf population, resources and food supply are tracked in a bar across the top of the screen and if you don’t keep a sharp eye on the numbers or fail to notice when they’re going the wrong way – say, when the food supply is ticking down instead of up – then your first indicator that something is amiss could very well be when your dwarves start dropping dead- which is itself a fairly easy thing to miss. Experience is the best teacher and it’s safe to assume that you’ll learn to pay attention after a famine or two, but it’s also safe to assume that you’ll suffer those famines in the early going.

Maps are randomly generated, so each new delve will present new challenges and opportunities, but one thing remains constant, as it has for dwarves throughout history: the deeper they dig, the greater the likelihood that they’ll run into trouble. And of course, you’ll be expected to seek out trouble on your own as you venture out into the world and attempt to reclaim the fallen kingdom of the Dwarves. But trouble can be frustrating because each campaign has only a single save-game slot, so if you make a bad move and then save, you may be left with no option but to start over.

A Game of Dwarves is a niche title that does nothing to advance the genre or the perception of dwarves as anything but boozy, weaponized midgets. But its middle-of-the-road blend of depth and accessibility make it the sort of “strategy-lite” game that could appeal to players who want a little more cerebral stimulation from their electronic entertainment but can’t be bothered to figure out Europa Universalis.

Bottom Line: The AI can be a bit clunky and its reluctance to bring important developments to your attention can be annoying, but if you’re out for some simple strategy fun that won’t bury you in arcane rules (or you just dig the idea of building your own glorious underground kingdom), A Game of Dwarves should suit nicely.

Recommendation: It’s hard to go too wrong for the price but even so, this one is likely only going to make strategy fans very happy.

Dragon Age 3 May Be BioWare’s Biggest Game Yet