There were five of us logged into Aion that day, ready to get started and level up together in-game. We had tanks, we had melee damage-dealers, we had magic damage-dealers, and a healer: We were the perfect group, joking together over Skype as we breezed through quest after quest. And then one of us spoke up: “Hey, anyone else notice we’re all guys, but nobody has a male character?”

Nope. We may have been a group of five male gamers, but in Atreia, we were a group of five attractive-looking female Elyos. Before it had been pointed out to me, I hadn’t given it a second thought – but it was true, and it made me stop and think about why I create the characters I do.

Almost every single character I’ve created in an MMOG recently is female. In WoW, it’s my female Night Elf Druid. In WAR, it was my female Dark Elf Sorceress. In Champions, a female power-armor user, in LotRO, a female human Captain, and now in Aion an attractive female Elyos Warrior with a lithe, athletic build and a short pixie-cut – because hey, swordfighting would be hard with a Farrah Fawcett ‘do, right?

Now, I’ve previously touched on the relationship between your real-life identity and your in-game persona: MMOGs let players choose their identities in a way that they simply don’t get to in reality. These games offer people a chance to become an idealized version of themselves – in real life, you could be a college sophomore who keeps nodding off in an early-morning lecture class, but in Atreia you’re a burly, grizzled Asmodean veteran gladiator. If we assume that players will often – not always, but often – choose a character that lets them become who they wish they were instead of who they are, then what does that say about my predilection to choosing to play as a hot chick?

Before we get into that, though, let’s look at some of the other reasons one might have for playing a female avatar. On the one hand, there’s the argument that says, “Hey, if I’m going to be staring at an ass for sixty levels, it better be a nice ass to stare at.” It’s certainly true that most male gamers do like to look at attractive women, polygonal or not. But is it different to ogle a female NPC or pre-created character than it is to check out a character that ostensibly is in the game as a representation of yourself? Lara Croft is Lara Croft, but Tieria the Night Elf Druid is me. 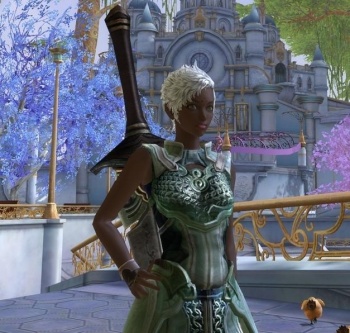 On the other hand, there’s the idea that female characters get treated better by other players (for similar reasons to the above). Perhaps looking for love in all the wrong places, male gamers assume that there’s an actual girl at the keyboard of that sexy female High Elf, and act nicer to her than they would otherwise. Maybe they help them with a quest, maybe they hook them up with in-game items, all in the hopes of… well, I don’t know, exactly.

In fact, that’s why The Escapist editorial assistant Lauren Admire said that even though she played female characters in single-player games like Mass Effect, she made male characters in social games like MMOGs to avoid male players assuming that she was a girl just because her character was and hitting on her. But on that line of thought – whenever I encounter someone assuming that I’m a girl because my character is, I’ve never had any problem correcting them before they assume any further. So the idea that I’d be playing a girl to get preferential treatment doesn’t apply much here, either.

So if I’m not trying to get extra gold and services by pretending to be a girl, and I don’t particularly see my characters as sex objects, what other reason could there be? Perhaps it’s simple escapism: For all games empower us to create an idealized version of who we want to be – rippling with muscles, valiant and renowned throughout the land – they also let us pretend to be somebody that we might never actually want to become, or could never become.

If somebody plays Mass Effect, makes their character look as close to them as possible, and then plays through the game as a violent sociopath, is that really their idealized self? Do Rogues and Assassins skulk through the shadows to put a knife in the back of their victims because the people at the controls harbor nascent treacherous motives? Or are these fantasies precisely that: Things we live out in-game because we can’t – and wouldn’t want to – in reality?

If I started going to the gym again and worked out every day, I could eventually look like a he-man champion, but no matter what I do I’ll never look like my characters in Aion or WoW or Warhammer, because they’re all attractive females, and I’m not. It doesn’t necessarily mean I want to be one of these hot, ass-kicking women (and believe me, my Aion Warrioress could whoop my butt up and down the Abyss) any more than, say, my choosing to play as the female trainer in Pokemon Pearl means I want to be a ten-year-old girl.

…At least, I certainly hope not. That’d be kind of weird.