A downside to starting up a television column in summer is that there’s not actually a lot to cover, at least in terms of new product. These are the months where whatever already worked earlier in the year gets to flex their re-run muscles while original programming becomes the dominion of the replacement series – odd works that didn’t have the producer confidence to run in the fall now filling up slots vacated by whatever those confident producers were wrong about.

Such is the case with Black Box, which landed on my radar not because its premise or casting sounded especially novel (a brilliant doctor who doesn’t play by the rules, you say??) but because of the near-universality of its bad reviews. To stand out as awful as a summer replacement series, this had to be something special.

It is. Black Box might be the stupidest thing I’ve seen on TV in years.

The series comes to us from the producers of the dearly-departed House, and feels almost shamelessly like an attempt to pick up right where that series left off: Another brilliant but unstable doctor played by another Brit putting on an American accent (this time Kelly Reilly as “world famous” neurologist Catherine Black) in another medically-skewed riff on the Sherlock Holmes antisocial-addict-as-brainiac-superhero routine. The twist this time? Whereas Gregory House couldn’t stop popping painkillers and, since his perpetually altered state frequently afforded him the maverick thought-processes to solve unsolvable medical cases, had little reason to. Dr. Black’s problem is staying on medication: She’s concealing a serious, lifelong diagnosis of bipolar disorder from everyone but her family and therapist (Vanessa Redgrave).

Unlike House, the show stops short (at least in its early episodes) of directly implying that Black’s medical/diagnostic prowess are a direct result of her affliction. Instead, the idea is that she’s driven to solve the mysteries of the human brain in an attempt to understand and control her own psychosis… but she’s also not-so-secretly convinced that her genius and her madness are inextricably linked, and in the first episode she’s introduced after deliberately cycling off her meds to deliver a rousing/rambling speech on her work to a medical conference wherein she (obliquely) compares herself to the likes of Hemingway, Van Gogh and Plath before railing against “normalization” and genius being “medicated into mediocrity.”

Ah, good. Exactly what TV was missing: The (literal) redheaded stepchild of Dagny Taggart and Jenny McCarthy. Except Black’s egomania and narcissism are meant to be tempered by the idea that she’s basically full of crap – the real reason she likes to flush her meds down the nearest available toilet (which, in the logic of this show, seems to itself trigger instant manic episodes) is that she’s reverse-addicted to the “high” of mental breakdown. Then again, since Black Box’s version of a bipolar “episode” mainly involves spontaneous jazz-dancing, flight-hallucinations and superhuman sexual prowess (I can’t yet discern whether the depiction of mental illness here is offensive or merely laughably moronic); why wouldn’t she? Well, other than the omnipresent knowledge that she inherited the illness from her mother – whom it drove to suicide. 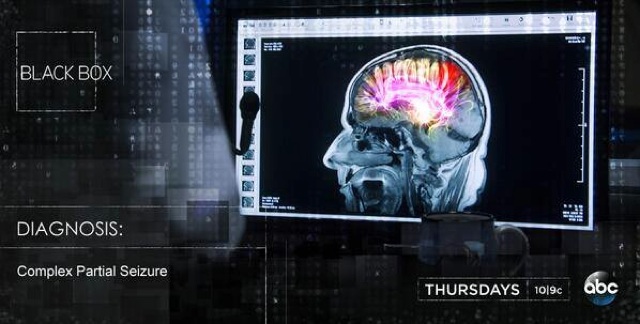 The drama is supposed to come mainly from watching Catherine brace against the secret-keeping necessitated by her predicament: If her coworkers and underlings at The Cube (a state-of-the-art neuroscience research hospital) were to discover her illness, she can be fired and even prosecuted… but her job is both an outlet and cause for her stress-triggers. She’s worshipped as the “cool aunt” by her niece… who doesn’t realize that Catherine is actually her mother (her “parents” are the doc’s older brother and his uptight wife). She’s only just recently revealed the full scope of her problem to her impossibly perfect long-term boyfriend – whose version of reassurance is to reveal that he actually enjoyed her busting into his house and sexually-assaulting him during an episode timed to drive him away – and is now tempted by the attentions of a handsome knuckle-dragging alpha male of a neurosurgeon at work.

The conflict, meanwhile, is supposed to come from her being constantly – wait for it… of two minds about her own work, to the point where you wonder if the showrunners actually know that that’s not what “bipolar” actually means. She knows her job is to cure patients of neurological affliction, but she clearly also believes that some, like her, might be better off “mad.” In the pilot, she’s allowed to split the difference by acknowledging that a troubled young man’s inexplicable newfound compulsion for surrealist graffiti is the result of a brain tumor, but also to determine that a lonely elderly woman is better off not being cured of the company of her imaginary Christmas Elf friend, Yojo.

I get the sense that Black would be an insufferable lead character no matter what (at least Greg House let the other characters expound on his genius and the necessity of enduring his eccentricities) but Reilly’s performance is awful on the level not usually seen outside of parody – have you ever seen someone do their “awesome” Nicolas Cage impression? That’s pretty much her version of “unhinged” here. I can’t actually tell if she’s a good actress or not (her most recent noteworthy turn was in the execrable Heaven is For Real, where her character name might as well have been Applepie Amerimom) but based strictly on Black Box one would have to conclude that she’s at best a legendary ham.

The rest of the cast vacillates between forgettable and cartoon caricature, most egregiously in the case of the surly, sexually-aggressive surgeon who’s exactly one eyepatch away from a soap opera knave. The cast’s big show-off “get” is, of course, theater legend Vanessa Redgrave slumming it as Catherine’s therapist/maternal-surrogate. It’s a nothing “look who we hired!” role, or at least it seems to be thus far – since I haven’t seen her interact with or even be acknowledged by the other characters yet (and since it makes little sense, even for this show, that a medical professional would actually keep Black’s “I’m practicing medicine while flying-high on self-induced bipolar meltdowns” secret) I’m getting the sense she’s meant to be revealed as a figment of Black’s imagination at some point down the line. Likewise, I’m having trouble imagining that the secret-daughter subplot exists for any other reason than for “Uh-oh – does she have it, too?” to come up as a tension-builder down the line.

Not that I expect them to get very far down the line. Black is a spectacularly unlikable lead, the mystery-of-the-week ailments so far would feel like House’s reject pile even without the producer connection and “which inappropriate location will Kelly Reilly dance around like an idiot in this week” isn’t really a compelling reason to keep watching. Fans of bewilderingly awful TV (or writers looking for a handy “don’t” checklist for depicting mental-illness responsibly) should check it out while they can though – it’s not like there’s much else to watch this time of year.