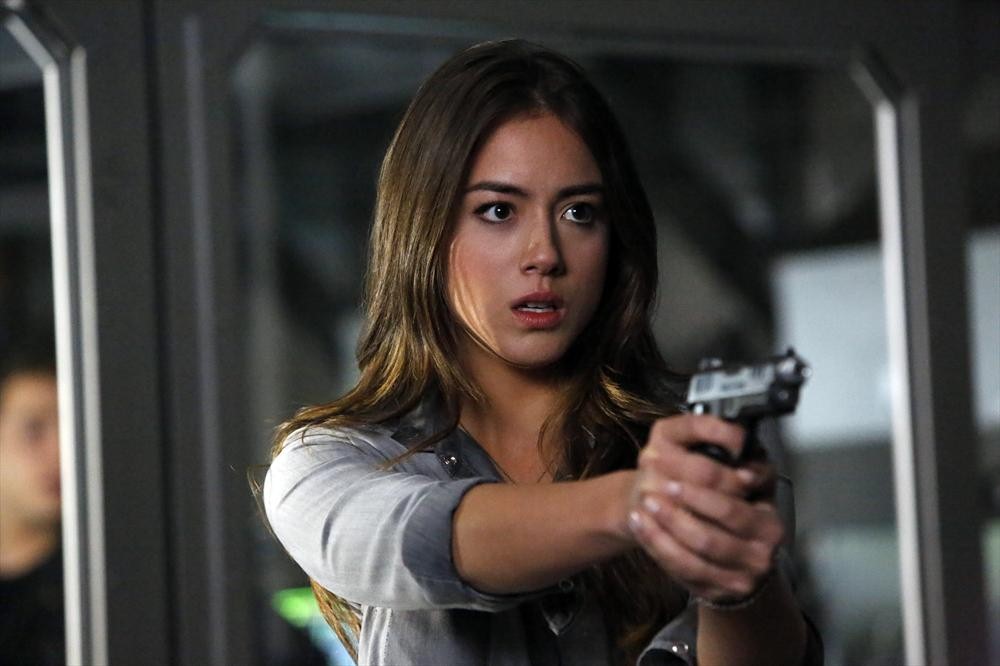 Alright, let’s get this out of the way:

It is not possible to continue writing proper recaps of the remaining seven episodes of Agents of S.H.I.E.L.D. without also spoiling major plot points (as in: the ending) of Captain America: The Winter Soldier. It was always part of the deal that this TV series would be tied-in to the Marvel Cinematic Universe, but anyone whose kept up with the show and took in the most recent movie can now attest that the ties are actually stronger than anticipated. Several of the show’s running subplots now appear to have been parallel lead-ins to the events of The First Avenger’s blockbuster sequel, and this season-ending Uprising story arc is now (thus far) taking-place parallel to the film – which, in case you hadn’t heard, ends in such a way as to guarantee that if Agents gets a second season, it will have to return as a rather different animal than it is now.

The show is poised to spoil the movie, and so a recap column is going to do the same thing. Consider that a warning for the rest of the season.

So, then, here’s where we are. A running theme of the series has been that something isn’t totally right with S.H.I.E.L.D. Certain Agents exhibit strange behaviors, Nick Fury has been away for an extended period and Agent Coulson was for some reason lied to (on multiple levels) about the circumstances of his post-Avengers survival. While Winter Soldier doesn’t quite turn over every stone, it does pull back the curtain on the root of the problem – S.H.I.E.L.D. is rotten at the core, and (alarmingly) always has been.

It’s been known since Iron Man 2 that The Agency was founded after WWII by Howard Stark, Peggy Carter and other members of the secret unit behind the Captain America project. What was not widely known was that S.H.I.E.L.D.’s founding fathers included Dr. Arnim Zola (Toby Jones), The Red Skull’s mad-scientist lackey and a member of the Nazi-subsect HYDRA. He was spirited away from war-crimes prosecution via Operation Paperclip (a real thing – that’s how the U.S. got German rocket-scientists to help found our space program) to put his technical-wizardry to use for the good guys.

As it turns out, that was a bad idea. 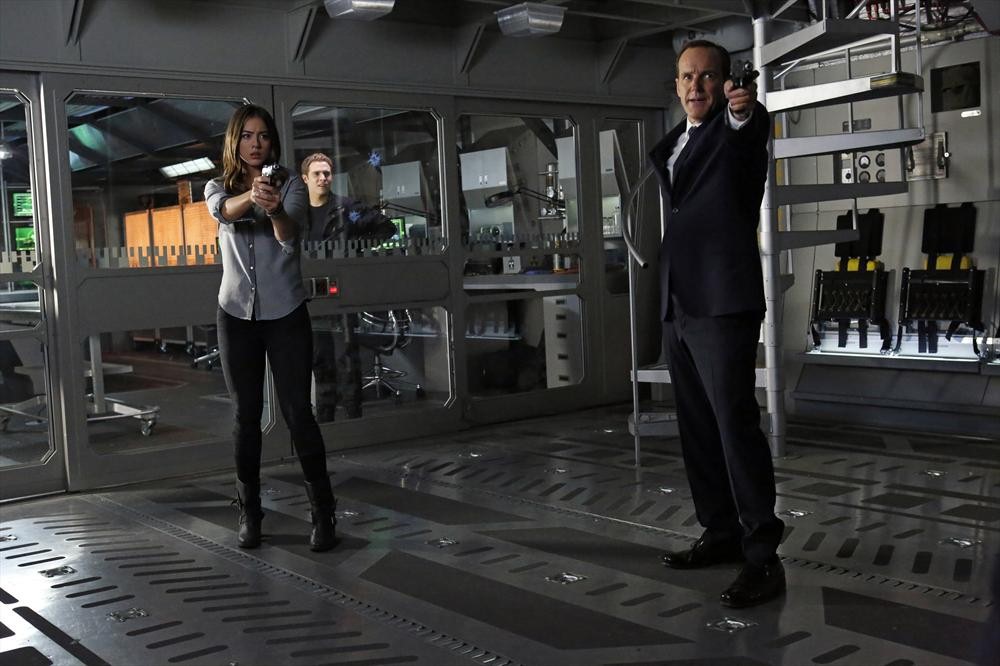 In CA: TWS, Zola (still “alive,” his brain having been transferred into a massive HVAC-era supercomputer in the 60s) reveals that, through him, HYDRA has lived on as secret society within S.H.I.E.L.D. itself, using The Agency to shape world events and set the stage for a global coup all this time. In the present, Zola’s parasite has now overwhelmed it’s host. The Agency is lousy with HYDRA zealots from bottom to top, and Captain America, Black Widow, Nick Fury, Maria Hill and The Falcon are only able to thwart their master plans by completely destroying and dismantling S.H.I.E.L.D. itself. In the present-tense of the Marvel Cinematic Universe, S.H.I.E.L.D. has ceased to exist.

So, at the very least, Team Coulson might have to change their name in a second season (or, more likely, operate on their own as a kind of mini S.H.I.E.L.D. tribute band) assuming, of course, that none of them turn out to have been HYDRA all along. But that’s not the only potential long-term effect on the series. Coulson and company have spent most of the season fighting a shadowy organization called CENTIPEDE whose enigmatic leader claimed to be psychic and called himself “The Clairvoyant.” In the previous episode,
“End of The Beginning”, Skye and Coulson thought they’d solved the mystery of his powers (actual psychics having not yet been proven to exist in the MCU.) His “vision” is really just access to S.H.I.E.L.D.’s massive intelligence databases.

So… wait. “What if it’s just somebody reading our personnel files?” wasn’t the first possibility they looked into? Yikes. With that kind of follow through, it’s kind of amazing they’ve only killed one red herring this whole time (Ward murdered the most recent suspect, believing he’d made a threat on Skye’s life.)

Now, obviously, my first thought was “Oh, so Arnim Zola is The Clairvoyant,” especially since HYDRA’s gambit in the film involved him having turned the ubiquity of minable-data in the 21st Century into a way to predict (parts of) the future via mathematically. But, then, since the reveal of the show was that The Clairvoyant was just a dirty S.H.I.E.L.D. Agent while the reveal of the film was that “dirty S.H.I.E.L.D Agent” is kind of a widely-held title… does it really need to be anybody? Especially since having the answer to a mystery be the reveal of a new mystery is the series’ raison d’etre at this point?

So. How do things actually fit together? Let’s find out:

We open with a needle drop (that’s when you stop a movie or TV show’s standard music score to play a piece of popular music) of “Don’t Fear The Reaper” as Agent Garrett’s (Bill Paxton) fighter jet comes under attack by a pair of S.H.I.E.L.D. drones. He radios for help from The Bus, but they’re a little preoccupied with the Mexican standoff between Coulson, May, Skye and Fitz that ended last week’s episode. 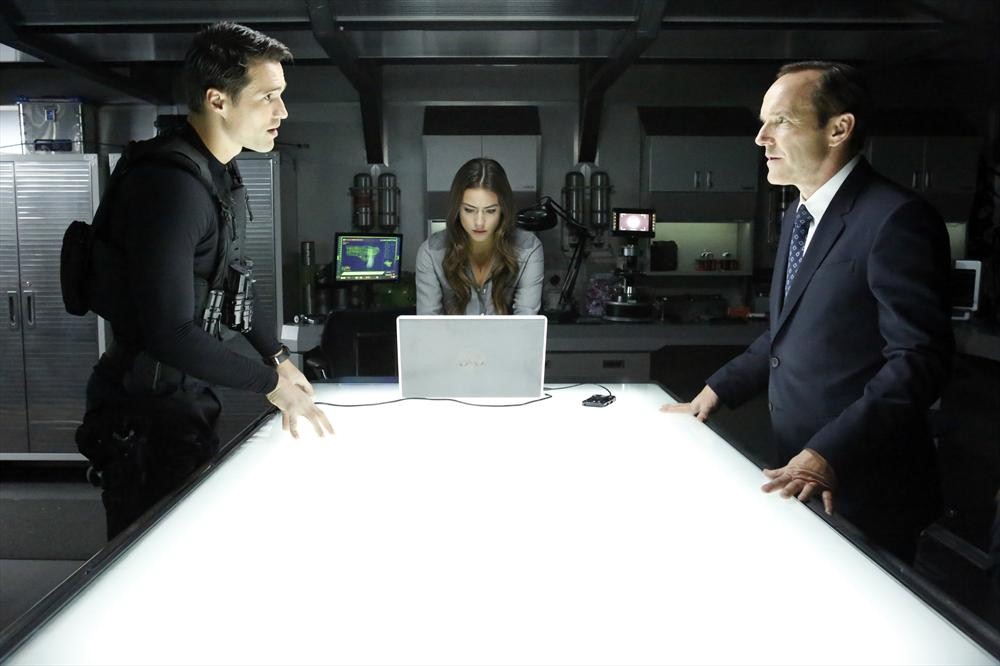 Short version: The person May has been reporting on the team for is none other than Nick Fury, but it’s bigger than that. She’s actually been the real brains behind the operation this whole time. Apparently Fury had reason to believe that his risky resurrection of Coulson (the actual reasons for which have still not been explained) might have negative side effects. He had May (the only person Coulson was guaranteed to request for his team) manipulate the parameters for the remaining lineup to ensure the presence of specific skillsets needed should anything go wrong.

That’s an awfully convoluted explanation for why our quirky, mismatched team is so quirky and mismatched… but, whatever. Garrett is about to be shot out of the sky and The Bus is being tractor-beamed to The Hub by Victoria Hand. Also at The Hub: Simmons and Triplett (Garrett’s sidekick), who are running tests on Skye’s mystery blood behind Coulson’s back amid commotion outside that we’re to understand is the third act of Winter Soldier getting underway. Triplett’s crush on Simmons has been teased at before, and since there’s really no other reason for him to be around he’s looking like a good prospect for becoming a series regular… except he’d sort-of make Ward redundant, so it’s not looking good for at least one of them.

Coulson shoots May with an icer for lying to him (she knew about Tahiti this whole time, even) and orders Skye and Fitz to override the ship’s weapons systems so they can have a brief (and clearly beyond the budget of this series) dogfight with the drones. With that done (and May ensconced in lockup with Ward), it’s time to have Skye hack the web for Captain America 2 spoilers and find out what about 98% of this show’s prospective audience already knows: HYDRA took over S.H.I.E.L.D. from the inside, and they’ve just gone public. Also, Nick Fury is dead.

Down on the ground, Hand (who Coulson etc now figure must be “The Clairvoyant” herself) gives a spooky “with us or against us” speech to her team of guards… but she never actually says “HYDRA,” so no prize for guessing this is clever misdirection before she pulls a pointlessly elaborate “feign evil, kill them if they’re okay with it” gambit on Simmons and Triplett. Hand, incidentally, is convinced that it’s Coulson who’s a HYDRA plant with pretty much every move he’s made since the start of the show being listed as evidence supporting this. 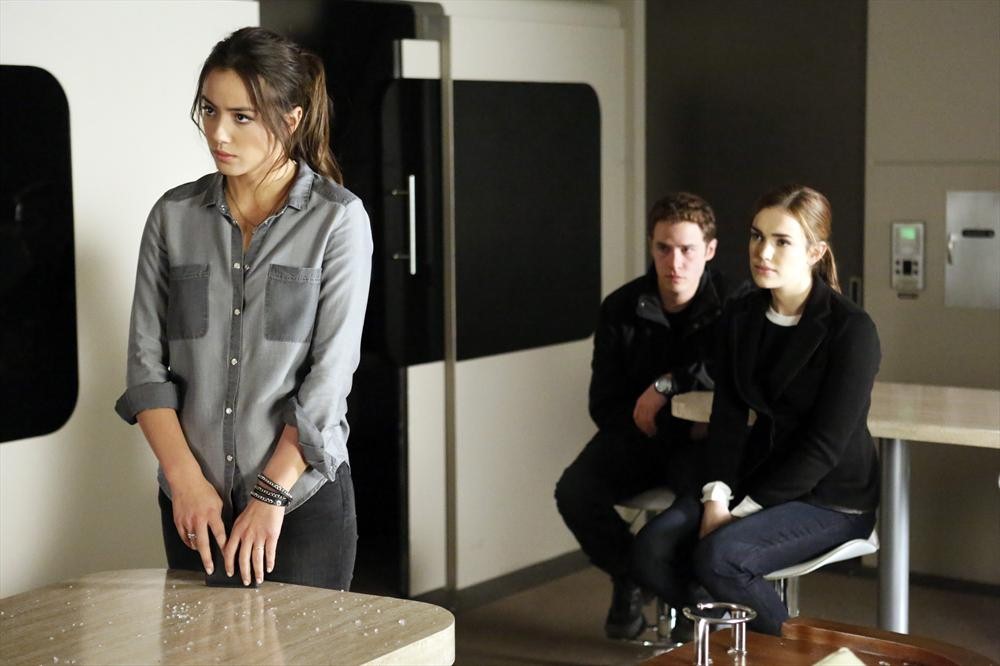 And so, it’s fortress-storming time: Skye and Ward (traveling with a backup drive containing data on all the weapons and supervillains they’ve encountered to keep it from HYDRA’s hands) head in to shut down security while Coulson, Fitz, May (handcuffed) and Garrett aim to take down Hand. So, two heavily-armed S.H.I.E.L.D. teams both acting under assumption that the other is HYDRA. Okay, that’ll work. Skye and Ward finally share a “moment” and a kiss, Ward goes guns-akimbo on some hallway mooks, Skye reveals she’s just going to blow up The Hub’s power-source instead of hacking it.

Garrett and Coulson get to talking about the recent events while they wait for the grid to go down, with Garrett doing most of the talking. Uh-oh. Monologuing. That can only means one thing. Sure enough, Garrett makes an “info only the bad guys would know” slip, Coulson calls it. A team of S.H.I.E.L.D. shooters turns up, Garrett notes that most of them are trainees of Agent Sitwell (revealed as HYDRA in Winter Soldier) and now the good guys are outgunned. So, Garrett is The Clairvoyant – at least to the extent there ever was one. 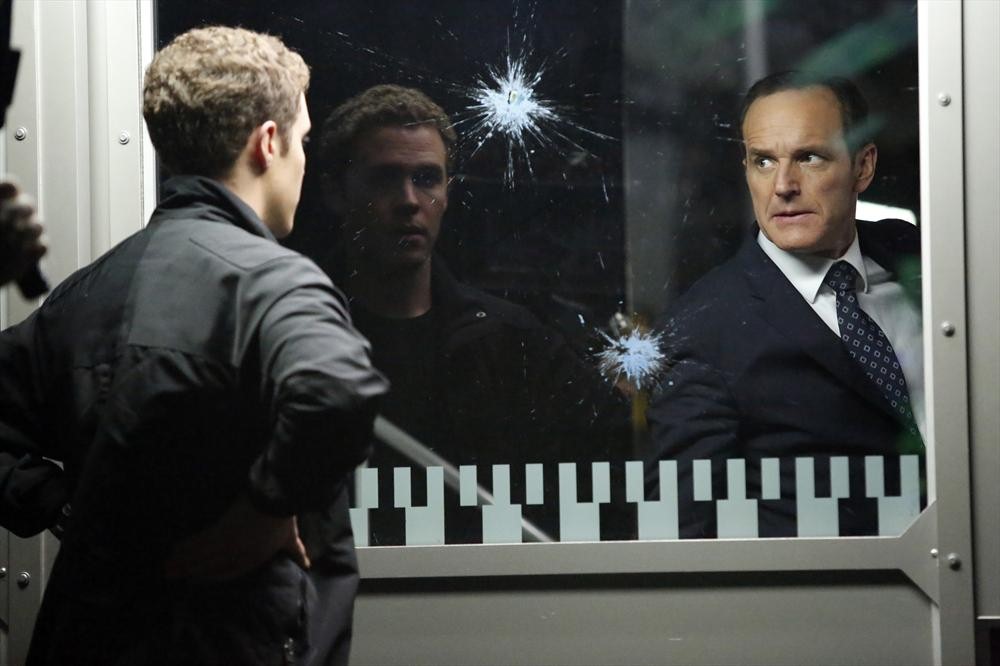 Skye’s bomb goes off and the set-lights switch to a warming shade of stunt double-hiding red. Paxton, Clark Gregg and Ming-Na Wen smack one another’s stand-ins around for a pretty decent fight scene. Fitz gets to shoot a bad guy and Coulson takes Garrett etc down with the energy-pulse weapon from Episode 2: 0-8-4. Hand and company pour in, announce that they’d monitored the whole fight and know Coulson isn’t HYDRA. He asks how many sleepers there were, Hand (who evidently knows what everyone who saw Winter Soldier knows, hangs her head.

For our epilogue, Coulson and Hand watch the destruction of the Hellicarriers and Triskelion from the climax of the movie; expositing that Captain America defeated HYDRA and destroyed S.H.I.E.L.D., but is now unaccounted for. Coulson resolves to take his team back on the road to help hunt down HYDRA stragglers (we’re told they’ve “seized a S.H.I.E.L.D. HQ in South Africa,” which is interestingly also a location where Avengers 2 did some shooting), Agency or no Agency. Ward doesn’t go with, though – he’s furious about Garrett (his friend and former trainer) being HYDRA, and wants to accompany Hand to The Fridge to help put him on ice personally. Gee. I hope something doesn’t happen to this character many fans never seemed to warm to that would necessitate his being replaced by that new guy whose already been set up as love interest for fan-favorite Simmons, right? (An insert-shot of an enraged Triplett is meant to inform us that he was not aware of Garrett’s activities.)

Sure enough, up on the prisoner transport jet, a royally pissed off Hand offers Ward the opportunity to “shoot the right Clairvoyant this time.” Ward loads a gun… and shoots Hand and her wingmen dead. Yup, Agents’ least interesting regular has been HYDRA the whole time.

…or it’s part of an elaborate triple fake-out (Ward doesn’t say “Hail Hydra” to Garrett, who looks surprised), because Odin forbid anything ever get fully resolved in this series.

Preview images seem to confirm that Raina, Garrett and Ward are mucking around with some of the confiscated tech from throughout the season so I expect Graviton, Blizzard and Deathlok will be reappearing for the big finish.