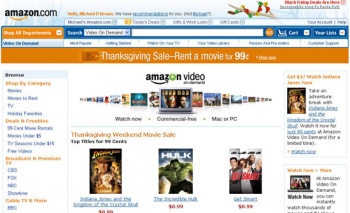 Online retailer Amazon is getting ready to launch an online streaming service for movies, putting it into direct competition with Netflix. Sources suggest that Amazon planned to launch the service this month, but has delayed it in order to iron out some technical problems and secure more content.

Amazon is apparently in talks with movie studios, trying to cut deals to allow the retailer to stream older films that had completed their run on pay cable networks like Starz and HBO. These movies – which are at least seven years old – are significantly cheaper to license than newer films. Netflix’s deal with Epix, for example, could see Netflix pay as much as a billion dollars over five years. People close to the situation have said that Amazon still has a long way to go however, as while it has been able to secure some independent content, it hasn’t worked out any deals with the six major studios yet.

It’s believed that Amazon will make the streaming service part of its Amazon Prime subscription, which gives subscribers unlimited shipping for a flat fee. Amazon Prime is around $15 cheaper a year than even the cheapest Netflix plan, but will likely have much less content – at least at first.

It’s going to take a lot of effort and smart decisions if Amazon wants to become a serious rival to Netflix in the US, but it’s not impossible. Amazon will also have to deal with Hulu’s efforts to expand into movies, an area in which the Hulu is showing some early signs of success. Amazon already has at least some of the infrastructure in place however, as it offers movie rentals on an on-demand basis.