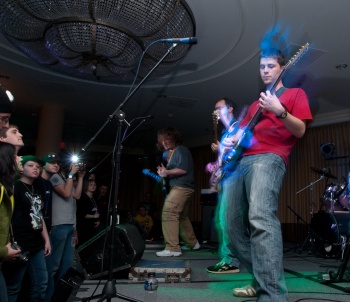 Sometimes, a couple bars of a familiar tune is all it takes to send you back to a time and place you hadn’t thought about in years. That’s how it is for me and old-school videogame soundtracks: A few bleeps into Snake Man’s theme from Mega Man 3 or DuckTales‘ “Moon Song,” and I’m instantly transported to the dimly lit game rooms of my youth. But if listening to the Metroid theme takes me back to a friend’s basement circa 1991, hearing Metroid Metal‘s take on it actually sends me back to the planet Zebes – space pirates, Chozo ruins and all.

Metroid Metal is the pet project of Grant Henry (aka Stemage), a musician and web developer with a love of progressive metal and videogame soundtracks. Beginning in 2003, Henry set out to apply his recording and guitar-playing chops to the score of Nintendo’s classic adventure-platformer. “Nobody had really taken the Metroid soundtrack and really gave sort of a prog-rock feel to it, so I decided to give it a shot with a few tracks,” Henry says. “Originally the plan was to do the first game’s soundtrack, the NES soundtrack. Then, after it was done, it was like, ‘There’s so many other good ones, too,’ so I just kept going.”

Henry’s catalogue now includes 25 covers of Metroid songs spanning nearly every entry in the series. They aren’t simply recreations of the old soundtracks with rock instrumentation, either. “I’ve never done straight covers,” he says. “There’s a lot of extra stuff going on, mostly in the rhythm section, that kind of makes it metal, you know? Messing with time signatures and rearranging parts, plus the occasional solo.” The results are songs like “Brinstar” and “Lower Norfair” that bring the mystery, suspense and epic scale of the Metroid series into the modern era.

According to Henry, Metroid‘s music is more suited to the metal treatment than most NES game soundtracks. “After playing the games later on, after having not touched them for so long, it just reminded me of how good the music was. And not only how good the music was, but it also has this feeling where there’s constant tension,” he says. “The music goes back and forth between having sounds that are more positive and then having more dissonance as well. I was like, ‘Well, that kind of fits right along with what a lot of metal music is like.’ And there’s so much melody there without a lot of rhythm – it kind of gives me some freedom to play around with the rhythms a little bit.” 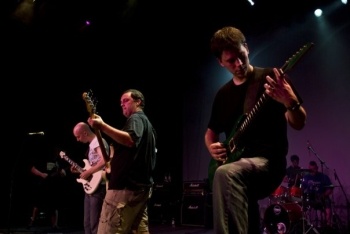 Beginning as a solo project featuring painstaking overdubs and programmed drums, Metroid Metal has slowly developed into a full five-piece outfit. Henry discovered most of his bandmates at Washington D.C.’s MAGFest (Music and Gaming Festival), which has featured other videogame music acts like the Minibosses, The Megas and Armcannon (whose guitarist, Dan Behrens, also plays in Metroid Metal). Last year, the group officially joined together to play for the first time at MAGFest 7.

“It was kind of scary, because the night before that show was the first time we’d ever played together,” Henry recalls. “I sent them YouTube videos with their guitar parts. They’re amazing guitar players, so I wasn’t really worried about that – it was the whole idea of playing it all together in the same place on a stage, you know? So we practiced the day before and then we played the next day.”

The collaboration worked so well that the group went on to play at the 2009 Penny Arcade Expo alongside acts like Jonathan Coulton and MC Frontalot. “PAX was just kind of a monster,” Henry says. “I mean, it was just huge in scale, and being on a stage that big and in front of so many people, it was the kind of thing where it’s epic, but at the same time there isn’t as much of a personal connection with the audience compared to something like MAGFest, where you’re right in people’s faces. They were both pretty grand for completely different reasons.”

And in yet another milestone, the band recently released Varia Suite, a full album of Metroid Metal music with better production and more lively performances than Henry’s solo work. You can stream all 14 tracks for free or download the full album for $8.

Fans of Henry’s music have plenty more to look forward to in 2010. “I just recently got invited to do some work for an upcoming game soundtrack, an indie soundtrack,” Henry says. “Something small, nothing huge, but something that I’ve thought about doing for a while.” Decidedly less small was the news that Metroid Metal will be playing at the inaugural PAX East in Boston this March, fresh on the heels of their performance at MAGFest 8 last weekend. And with their live shows getting more frequent, fans are only getting hungrier for more. “I’m getting all kinds of weird requests for like certain bosses from Metroid Prime 3,” he says, “and I don’t even remember some of that music.” Ah, well. Beats hearing “Freebird!”