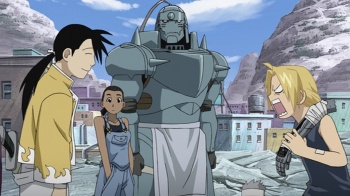 In my review of the first season of Fullmetal Alchemist: Brotherhood, I sharply criticized the show’s pacing and the way it handled the introduction and basic characterizations of the main cast; that, in comparison with the first series, it “simply moves too fast.” This caused something of a stir (you may have noticed), but my opinion hasn’t changed, though I’m still not sure I can put my finger on exactly why.

Is it because I’d seen all of the material before but over the course of double the number of episodes in the first series? Sure, that has something to do with it, and I freely admit that it’s an unfair comparison. But someone on the team made the conscious decision to compress that content into only thirteen episodes, and there’s more to it than mere nostalgia: The character development in the early episodes of Brotherhood felt empty or flat. It just didn’t grab me like the first series did.

Maybe that’s still not fair to Brotherhood, but I also said something else at the end of my review: “What will really make or break this series … is the next thirteen episodes.” And where the first thirteen episodes utterly failed to impress, the next did the polar opposite. And for the first time since I started watching Brotherhood, I found myself genuinely interested in seeing what happens next. This is very much to the show’s credit, considering I’ve read much of the manga, so I already know what’s going to happen next.

What caused this sudden and abrupt about-face in my opinion of Brotherhood? Well, a lot of it is because the series is finally covering new ground – don’t expect to recognize anything from the first Alchemist in these episodes. And boy do they cover a lot: The conspiracy surrounding the homunculi and the military begins to unfold, the brothers grow ever closer to understanding what’s happened to their bodies and how they might get them back, and a mysterious figure identified only as “Father” whom appears to be the originator of all of the homunculi makes his debut.

The pacing hasn’t really changed very much – it’s still fast as ever – though that is actually beneficial when you’re trying to build tension and suspense. It almost seems too much at times; every episode seems to pack another whammy of a twist, and just as you being to accept it another major event shakes things up again.

Not that this is really a bad thing, mind you – I could almost get used to it, but then I’d have to deal with the crushing disappointment of reality every time I watched another shonen anime with a plodding pace. The speed sure beats out the pacing of many of its contemporaries – the likes of Bleach or Naruto, or the mother of all of them, Dragonball “Are they still on Namek?!” Z. I just hope that there are future episodes where the pace is allowed to slow down and give the viewer a breather to reflect on things.

To fall back to nitpicking for a moment, I still don’t like the art style as much. And I recognize that this isn’t much of a complaint – the art isn’t bad, far from it – it’s just stylistically different from the art of the first series. Take that as you will.

The timing of the humor in some spots could use some work as well. There are moments in an episode where the tension is mounting and the suspense has grown to almost palpable levels – and then the background is replaced with a bright wash of colors and all of the characters turn into chibis and start yelling and hitting each other. In such an otherwise serious anime, it can just ruin a scene. And even if this brand of humor is more accurate to the manga, anime and manga are not the same medium, and what works in one may not necessarily work in the other.

I never truly believed that Brotherhood would turn out to be a bad or even mediocre series, but it was reassuring to see my doubts shattered so thoroughly with this season. Whereas the first episodes felt flat and difficult to sit through at times, the thirteen episodes of this second part of Brotherhood have had me on the edge of my seat the whole time. The fast pace that I so criticized last season has tackled the new manga material skillfully and completely succeeded in making a genuinely entertaining season. If things keep going this way, I suspect the rest of Brotherhood will make for quite an anime.

Bottom Line: Brotherhood finally finds its stride in Part 2, and once it starts running it doesn’t stop. Rapid-fire plot development and a building air of tension and suspense with the always-interesting FMA cast makes for one ride you won’t want to miss.