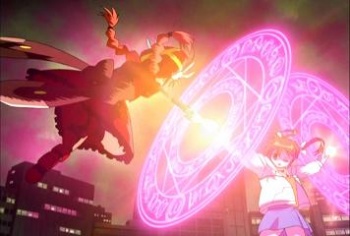 It’s another of those anime where people in funny costumes stand on nothing, floating above some Japanese city while they make threats against each other, moving only their mouths. (Or conferring with each other via telepathy, so they don’t even have to move at all.) Magical Girl Lyrical Nanoha A’s is the second season of a TV show about Nanoha, a young girl with techno-magic super powers. This series gets the fan service out of the way early – the “girls getting naked to transform into armor” sequence happens in the opening credits – so they can concentrate on story. Lots of story.

The plot in a nutshell: there’s a group of good girls and a group of bad girls, and they get along pretty well except for this one thing. The bad girls have to be stopped because they’re killing monsters to use their energy to fill pages in the Book of Darkness, which, once filled, could spell doom for us all. Those girls aren’t really all that bad, though; they’re doing this to help out a sick friend. In fact, everyone in the show is really, really nice, except for a few times when they try to kill each other with chain-swords that shoot laser beams.

We just looked at Red Garden, which spent a lot of time on what mopey teen-agers in New York might be like, especially if they were suddenly informed they had to fight or die. Nanoha A isn’t nearly as angsty or as dark – there are bright colors, cute fluffy monsters styled as “familiars”, and a nifty space station with nice couches to sit on. Nanoha A isn’t anywhere near the real world, it’s about superheroes fighting their secret war against each other, without worrying about any secret identity. Some of these girls might be teenagers, but they sure don’t act like it. Especially jarring are scenes of domestic life, both for the characters who live in modern-day Japan and for the future space-time police, which sedate and stagey to the point of absurdity.

Gears grind when the tone shifts to the fight scenes. The Nanoha series are remarkable for their brutality – for the magical-girl genre, anyway. When the girls hit each other, not only do clothes rip, but bruises well up, cuts turn red. (No blood, though.) The fights with monsters, so prevalent in the first series, are almost entirely absent from Nanoha A’s. Many times, the scene is spliced in after the fight has already ended, or cuts away before it will begin. That’s okay, though, because there’s not much remarkable about the fights, anyway. Characters will turn into neon lights, or float in the air, or something like that – there aren’t any whiz-bang moves. Even the magical spells don’t add much more to the attacks except more glow.

This series adds a new weapon upgrade, the “cartridges” that add a strange gun-like quality to the staffs and swords, supposedly “trading long-range accuracy for more damage” or something like that. Also, there’s now “armor”, which for plot-related reasons is now styled to look “just like clothing” – or, as revealed in one scene, as toys from a toy store. Every time the characters talk about their fighting upgrades, it’s like an expository cut scene from a video game.

Speaking of weapon and clothing upgrades, Nanoha A’s is much more “toyetic” than its predecessor. The characters are a lot more fun to look at it, and the colors are much more vibrant. The girls have multiple costumes and weapons … and there’s a lot more girls, too, so you can pick your favorite and root for them. Maquettes, statues, posters, and other merchandise are all available — and all very much marketed towards the adult collectable market.

Bottom Line: Magical Magical Girl Lyrical Nanoha A’s combines a boy’s love for people hitting each other with fantastic weapons with a girl’s love for domestic scenes and people talking about their feelings .. and the result is a magical-girl show that drips thickly with the subtexts parodied so strongly in Welcome to the NHK: a bizarre fantasy where impossibly-nice, somewhat-sexualized little girls have an epic struggle that doesn’t involve any scary adult people, and you can take home a figure of your favorite girl for only $99.95USD.

Recommendation: If you liked the first series, and you want to see more characters, drawn better, with a stronger storyline and richer characterization, you should definitely watch Magical Girl Lyrical Nanoha A’s. Everyone else will most likely find Nanoha A’s to be slow and repetitive at best, and impenetrable and clichéd at worst.

Even Norman Rafferty thought that adding a scene with librarian cat-girls in zero gravity was a bit much.

Funimation has all 13 episodes of Magical Girl Lyrical Nanoha A’s in a Region 1 box set, sold separately from the first series.

The Beauty of Robotic Imperfection