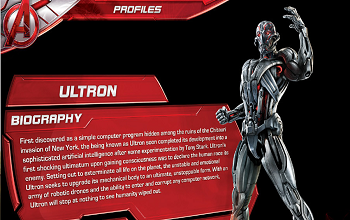 Supposedly leaked promotional art for Avengers: Age of Ultron includes details about the origins of Vision and Ultron.

2015 is almost here and with it comes the glorious reality that Avengers: Age of Ultron is only five months away from hitting theaters. As smile-inducing as that thought is however, we could understand if Marvel fans still might need a little something here and there to help them through the final months of waiting. Luckily, the rumor mill never seems to stop producing tidbits to help tide us all over.

Take, for instance, some recently leaked pieces of Age of Ultron promotional art. Originally posted on Reddit, the images in question provide origin details for both Vision and the film’s antagonist Ultron. Vision is described as having been “programmed by the combined geniuses of Tony Stark & Bruce Banner” and will apparently come equipped with “the ability to fly, project intense energy beams and change the density of his form.”

Ultron, in turn, will apparently start off “as a simple computer program hidden among the ruins of the Chitauri invasion” which, fans may recall, took place at the end of the first Avengers film. Tony Stark has likewise been pinpointed as the man responsible for its “development into a sophisticated artificial intelligence.” The description goes on to say that Ultron will spend the film trying to upgrade its body “to an ultimate, unstoppable form” and that it will also have “the ability to enter and corrupt any computer network.”

We should state, of course, that Marvel has yet to confirm whether or not these promotional materials are real. That said, they certainly look the part and nothing we’ve already learned about the movie would seem to contradict what’s been described. What do you think of Ultron and Vision’s origins? Are you satisfied with Ultron being a byproduct of the Chitauri or is there an alternate origin you might have preferred? Check out the promo images and let us know.