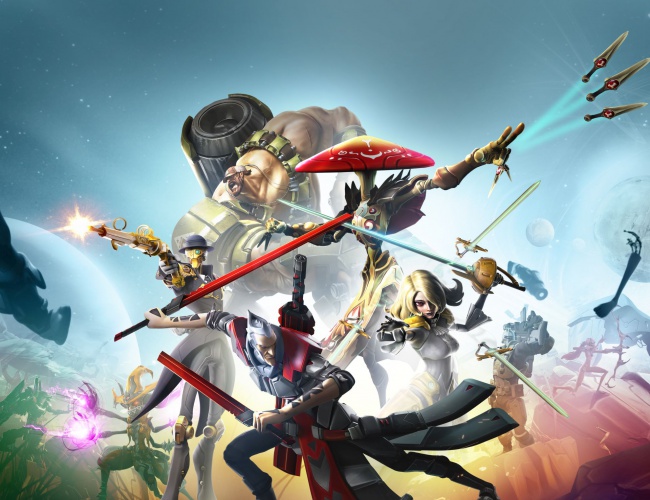 In my humble opinion, Gearbox Software’s most notable achievement was the progression from Borderlands to Borderlands 2. The original was incredible, and I played way too much of it, but the team at Gearbox stepped it up in virtually every way for the sequel, which I spent at least twice as much time in. Tiny Tina and Torgue were some of my favorite characters in recent memory, and Borderlands 2 had no short supply of these wildly over-the-top character types. The real clincher, however, was the co-op play, which is what kept me in game for dozens, maybe hundreds of hours after I completed the campaign.

When I first heard of Battleborn, I may have actually groaned to myself. I would swear that everybody that’s ever worked in game development at any point in history was now working on some sort of team/hero shooter. As I learned more about it, though, it started to stand out more and more in my perception, and when I finally got hands on, I was not disappointed. Please don’t get me wrong, I’m excited for Overwatch, and I had a great time with Fortnite, and I’m sure there’s something to be said for each in its own right. But Battleborn really spoke to me with its single-player/co-op campaign focus, with story missions that you can tackle on your own, or with a group of friends, in addition to the multiplayer modes that players have come to expect.

The premise has you – and every other race in the universe – stranded in the last solar system with an active star. Someone out there has been deliberately accelerating the death cycle of the stars in the universe, until only one remained. You’ll be teaming up with your friends to learn about the mastermind behind the seeming end of the universe, and ostensibly to try to take them down.

The roster features 25 different playable characters, each of which – to some surprise from me – actually seemed unique among the pack. There’s the squishy, life-draining samurai. There’s a tentacle-armed witch. There’s a robot butler with a sniper pistol and a fancy hat. I’m just going to stop there. I’m not convinced there’s any way to top the robot butler.

The action of the gameplay was fantastic, with enemies rushing in from all sides, and your team of heroes either laughing at their futile attempts, or scrambling desperately to revive fallen comrades while staying alive themselves. Things would be well in hand one moment, and completely out of control the next, and the surprising dynamism of combat really truly worked. In many situations, going from “under control” to “complete mayhem” would seem frustrating, but here it just felt fun and interesting.
Each of the characters I tried felt completely distinct from the others, and the variety of character types offers a way to play for almost every sort of gamer. You’ve got melee fighters, if you need to be in the thick of things. You’ve got mid-range soldiers, who can dish it as well as they can take it. You’ve got at least one long-range sniper, like the aforementioned fancy-hatted robot butler. Of course, it’s not just their weapons that distinguish the characters.

Each of them have skills that further set them apart. My favorite robot butler, for example, has a slow time bubble which he (it?) can project some distance across the battlefield. There’s also a mechanical owl that circles the target area until an enemy shows up, when it starts acting like a proximity mine.

Given the focus on the single player and co-op experience, it’s not unreasonable to expect Battleborn to be a bit less shiny and enduring on the multiplayer side of things, but for single-player and co-op gamers like myself, this definitely strikes a chord.