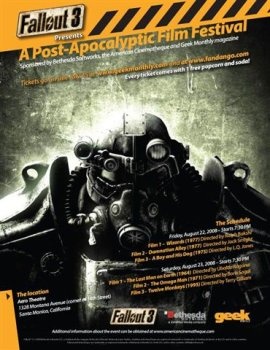 Get ready for a night of nuclear holocausterrific good times in California, where Fallout 3 maker Bethesda is presenting a Post-Apocalyptic Film Festival.

The company has teamed with American Cinematheque and Geek Monthly magazine for the event, which will be held over two nights in August at the Aero Theatre in Santa Monica, California. Beginning at 7:00 p.m. on August 22, the festival will kick off with Wizards, before moving into the cheeseball fun of Damnation Alley and wrapping up with A Boy and His Dog. The festival’s second night will begin at the same time with the 1964 Vince Price film The Last Man On Earth, then move into the 1971 classic The Omega Man and finish with a bang with 12 Monkeys, a Bruce Willis movie that’s really a lot better than most people think.

“We are very excited to sponsor this film festival with the American Cinemantheque and Geek Monthly magazine as this event brings together fans of film and videogames like never before,” said Bethesda Softworks President Vlatko Andonov. “This is an exciting time for us and this film festival gives us a fun platform to give people further insight into Fallout 3.”

“Co-sponsoring this film festival just made perfect sense for us here at Geek Monthly magazine,” added Michael Eisenberg of Fusion Publishing. “The showing of post-apocalyptic films that have captivated moviegoers’ imaginations over the last 40 years and showcasing the definitive post-apocalyptic videogame will make for a truly enjoyable festival for fans of the genre.”

The price of admission is amazingly cheap: Ten bucks gets you in the door for all three movies, along with a bag of popcorn, a large soda and a “special Fallout 3 giveaway.” The only catch: You have to go to Santa Monica if you want to see the movies. Tickets go on sale July 25 at Fandango.com; for more information, hit americancinematheque.com.