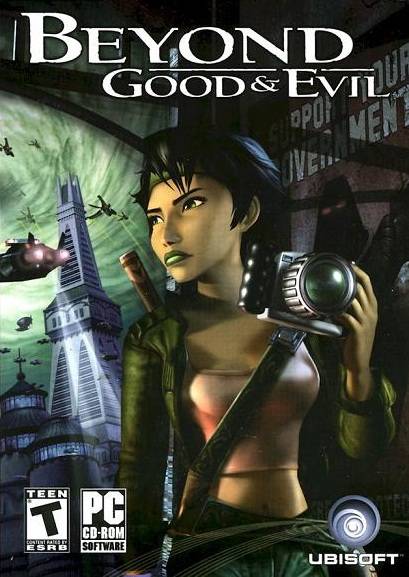 Beyond Good & Evil sits on a great many gaming lists. It’s considered one of the best games nobody played. Its among the top classic Ubisoft games fans want sequels for. It even broke new ground in offering non-combat gameplay options. And in many ways, I have to agree that Beyond Good & Evil is a wonderful, charming game that highlights many amazing things we can do with the medium.

That ‘s not to say however, that it doesn’t have flaws. Nostalgia-tinted glasses can help cover up a lot of problems, but if you’re a first-time PC player you may have a hard time dealing with its fussy camera, compatibility and occasionally lackluster mechanics. Even knowing that, Beyond Good & Evil is still well worth playing, and it’s a supreme shame that, warts and all, we never got the full trilogy Ubisoft originally planned.

The game is set on the world of Hillys; a small, fairly peaceful planet that’s the latest to be attack by the alien invaders known as the DomZ. In response, a military force called the Alpha Section has stepped forward to defend the population, but their intentions may be less noble than most citizens suspect. The player takes on the role of a young photojournalist named Jade. When the war begins, she and her mentor are helping shelter children whose parents have disappeared in recent weeks. But when the invasion begins, Jade’s suddenly offered a surprising new job: Investigate the Alpha Section. Armed with her camera and her wits, Jade has to infiltrate Alpha Section and expose its conspiracies to an unaware public.

If nothing else, Beyond Good & Evil is an incredibly unique game. Despite being set on the edge of a massive interstellar war, the player isn’t some macho action hero or space marine, but rather a humble photographer determined to report the truth. Even when Jade gets in the thick of the action, you’re free to use stealth and non-combat options. And when combat does occur, Jade has to be smart about it, targeting weak points before her enemies can attack.

The world itself is also varied and interesting. Levels combine everything from platforming in natural environments to crawling through dystopian sci-fi structures. Model designs are just as individual; enemy units alone range from wildlife and most charming robots to the practically Lovecraftian DomZ. Even ordinary Hillyian civilian NPCs are a diverse mix of humans and intelligent anthropomorphic animals, such as the bull who keeps bar or the walrus who runs the market. And that doesn’t even scratch the surface of wild animals that you can photograph and catalog for extra cash. It all adds up to make Hillys feel like a massively complex world, despite the setting being limited compared to open games like Skyrim. 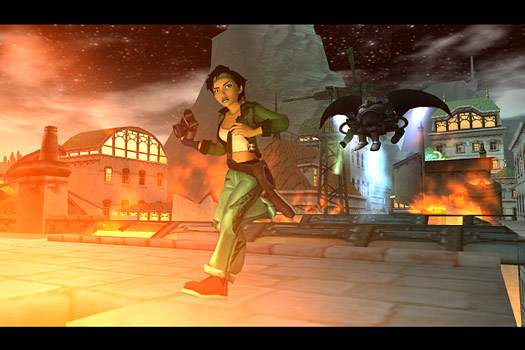 Speaking of photographs, the game mechanics themselves feel like a grab bag of non-traditional systems. One of the primary ways you can earn cash (along with game advancing pearls) is to explore Hillys taking pictures of animals Pokemon Snap style. It encourages you to explore every aspect of the environment, although you might feel a bit obsessive when you catch yourself snapping pictures of boss monsters before you start fighting. There’s also stealth sections, hovercraft race side quests, and an air hockey mini-game. It’s like the developers looked at a list of non-shooter game mechanics, checked off their favorites and dropped them into a blender.

For the most part, that helps make the game feel fresh and exciting. But there comes a point where the novelty wears off and it becomes clear that these systems aren’t as refined as they could have been. Outside of the main story quest and animal photography, most of the gameplay feels unpolished. The stealth sections initially feel threatening, but are far too easy once you get the hang of them. The racing loses its appeal once you’ve earned first place in each course. The open exploration tends to get dictated by the narrative; at one point the game flat out tells you to explore for pearls before the main story can continue.

Then there’s the fact that the PC version of the game hasn’t held up so great on modern systems. There are all kinds of graphical tears and glitches that seem linked to compatibility issues from the very first mission. Adjusting your advanced settings can help, but I had to outright tweak my video card settings before it felt considerably better. Then there’s the annoying fact that Beyond Good & Evil, designed before widescreen TVs were as common, uses black bars to look like a widescreen film. What this means is that on an actual widescreen monitor, it’s either stretched or looks like a game being played inside another black box. And it doesn’t matter what matter what resolution you set it to. Trust me. I tried them all.

But is Beyond Good & Evil still worth playing? Absolutely. In a year where Ubisoft took so many blows for disappointing games, Beyond Good & Evil is a reminder that the studio has long been capable of producing amazingly creative work. The character of Jade, especially, strikes me as an achievement that Ubisoft should be proud of. Whatever you can say about the publisher and its relationship with female game protagonists today, Jade is a fantastic character whose wonderful portrayal by Jodi Forrest is probably one of the biggest reasons that many gamers still hope for a sequel. Beyond Good & Evil certainly isn’t the best “good game nobody played” out there. But there are countless legitimate reasons that people remember it fondly and it’s well-worth picking up at GOG.