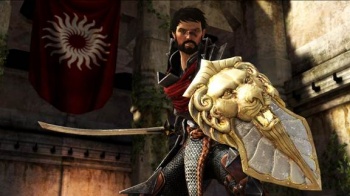 The first Dragon Age could be difficult if you weren’t familiar with party-based RPG tactics and Mike Laidlaw says he fixed that in the sequel.

I’m not saying that the difficulty turned me off at all in Origins – I quite liked how I needed to think through how my mage Grey Warden would paralyze opponents so that my rogue and warrior could finish them off. Others complained, however, that the normal difficulty setting was too tough and I know more than a few players who enjoyed the game much more with the slider on ‘casual.’ Many people who’ve played the demo or previewed the first few hours of Dragon Age II have noticed that the combat doesn’t seem as punishing as its predecessor. Mike Laidlaw, lead designer of the game at BioWare, explained that he thought that the default Origins was too hard, and he adjusted the difficulty to compensate.

“I did feel Origins ‘normal’ [difficulty] was pushing too hard on the high side and no one wants to set their game to ‘casual’ unless they’re comfortable being here just for the story, and that’s fine. But as a player, I don’t feel I should be able to pick what’s arguably the default difficulty and get my ass handed to me again and again,” Laidlaw said.

In response to that perception, Laidlaw’s team created a system of rules for how they would judge the difficulty of the game. “We used an approach where we tried to develop essentially rules for the players, in terms of what our expectations were. So when we threw quality assurance and testers and focus tests at it, we knew what our expectation was,” Laidlaw told me in a phone interview today.

“Our goal with the game for ‘normal’ is that you, as a player, should be playing one character optimally, whether that be Hawke or you focus on one of your followers. You’ve got one character that you’ve buffed up, got the right combination spells, you’re playing them well. You shouldn’t see huge instances of party wipes. You might lose a person or two, and there’s certain boss encounters where it might take you a couple of tries to figure out the tricks,” he said. “To me, that’s a fair expectation for ‘normal,’ it presents the player with difficulty to keep them interested but without it being frustrating and fist punching our controllers.”

For the more hardcore players, Laidlaw provided the higher difficulties. “For ‘hard’ and ‘nightmare,’ our expectation is the player will be playing the whole party effectively. You’ve been building your talents to work together and so on and so forth. As a result, the game for ‘hard’ becomes quite a bit more challenging because we’re expecting you to be, not at 4 times efficiency, but quite a bit more efficient.”

What about the masochists that want their ass handed to them on every fight? “‘Hard’ is there. ‘Nightmare’ is there for absolute ass-handing. But that was how our balance was done – through methodology and expectations.”

What I took away from my conversation with Laidlaw is that Dragon Age II ‘normal’ is Origins on ‘casual.’ So if you want the same experience you had in Origins, I’d suggest bumping the difficulty up to ‘hard’ from the start.

That’s what I’m going to do anyway.

Check back tomorrow and the rest of the week for more of my conversation with Mike Laidlaw.