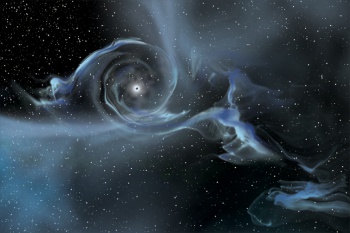 Image Source: NASA
How exactly do you measure the spin of something that is invisible? Astronomers believe they’ve found a way.

Somewhere, at the center of a spiral galaxy 500 million light years from Earth, a black hole is doing what black holes do best: consuming everything surrounding it. As unwitting planets and stars are sucked into the black hole’s maw, matter collects in an accretion disk and begins to orbit the center of the black hole. As more matter is pulled into oblivion, the accretion disk spins faster and faster, like an ice skater executing a tight camel spin.

Unlocking the spin of a black hole could help astronomers uncover more information about the evolution of galaxies. As black holes chows down at the all-you-can-eat galactic buffet, it spits out incredibly hot particles at high energies. These particles can prevent intergalactic gasses from cooling and forming new stars. Scientists don’t know why the particles are ejected into space, but understanding spin could help solve the puzzle. “We know the black hole in the centre of each galaxy is linked to the galaxy as a whole, which is strange because black holes are tiny in relation to the size of a galaxy,” says lead researcher Professor Chris Done. “This would be like something the size of a large boulder (10m), influencing something the size of Earth. Understanding this connection between stars in a galaxy and the growth of a black hole, and vice-versa, is the key to understanding how galaxies form throughout cosmic time.”