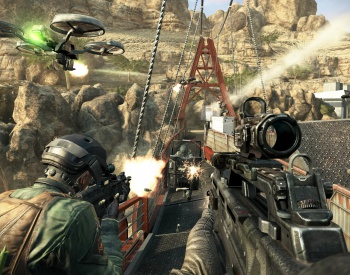 A lot of people ordered the latest Call of Duty before it even came out.

Ever since the crazy astronomical numbers of Call of Duty: Modern Warfare 2 in which the game sold more than 7 million copies on November 11, 2009, each iteration of the shooter franchise has performed better than the last. While many of Black Ops 2‘s customers picked up the game today or at one of the many midnight events organized across the United States, a healthy portion of gamers pre-ordered the game through the online retail outlet Amazon.com. How many? Well, we don’t really know the specifics but, according to a Tweet from Amazon’s game feed, Black Ops 2 now reigns supreme as the most pre-ordered game in Amazon’s history.

I’ll let you make a guess as to what was the previous record-holder? If you answered Call of Duty: Modern Warfare 3, you get a quadcopter-shaped cookie. There are no hard sales numbers yet from Activision regarding how Black Ops 2 fared today, but if the trend continues – and there’s no reason it won’t – the latest Call of Duty will continue to break every sales record known to man.

Given the high-profile releases earlier this month that have fallen short of breaking these records, I’m pretty sure EA (Medal of Honor) and Microsoft (Halo 4) are kicking the dirt at Activision’s high-flying sales.

Big Deal on the Internet