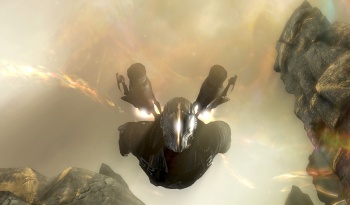 Capcom is letting us check out its multi-dimensional jetpack sci-fi shooter before having to take the full plunge.

On very short notice, Capcom has revealed that a Dark Void demo will be available for download this week. The demo will hit Xbox Live sometime on January 6, and the PlayStation Network on January 7. Dark Void may not have the voice that a Halo 3 or a CoD:Mew Two has, but it’s definitely a title with a lot of potential. An early demo release at least infers confidence on Capcom’s part.

Dark Void is a sci-fi shooter that not only solves the mystery of the Bermuda Triangle, but also brings back Nikola Tesla, one of the greatest minds the world has ever known (or one of the most mysterious). The main character gets sucked into “The Void”, an alternate dimension full of weird alien creatures trying to get to our side. The story sounds solid enough, but it’s in the gameplay that the true fun seems to be had.

Vertical combat is one of the features touted for Dark Void. Rather than fighting only on solid ground, you’ll also be fighting your way up cliffs and mountainsides while aliens and robots shoot downward at you. Later on you get a jetpack, and soar around the skies as you try to hijack UFOs. If you want to know more, you could always watch a trailer or two, as there are quite a lot of Dark Void trailers out there.

The game is due out January 19, so don’t forget to pre-order if you like the demo. I’m just saying, you’ll probably want to get the golden jetpack or the cute little figurine depending on your choice of videogame retail establishment. Personally, I’m also looking forward to the 8-bit version. This demo should finally let us know if the franchise has legs or not.

“Frumpy Mom” Says Videogames Made by the Devil