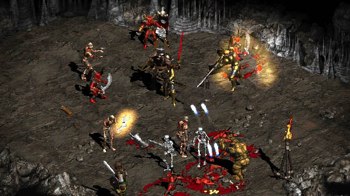 We’ve already learned about the cancelled Game Boy versions of Diablo thanks to excerpts from David Craddock’s upcoming book Stay Awhile and Listen, but his latest reveal is perhaps even more intriguing: After Diablo II‘s release, a team within Blizzard starting working on a concept that played just like Diablo, but traded dungeons for a futuristic space setting. What’s more, the company actually produced several playable versions of the title, which was subsequently nicknamed “Starblo.”

“The project earned the nickname Starblo for its mix of a space setting and the action-RPG formula that made Diablo so successful,” Craddock explains. “Like Diablo 2, Starblo would take place over several acts, but rather than journey across a single world, players would board their customizable spaceship and travel to new planets, killing and looting the space creatures they found there.”

Given that the game never saw release, we have to assume that the playable builds weren’t compelling enough to warrant further resources. Still, Craddock doesn’t appear to have evidence of when – or even if – the space-themed action RPG met its ultimate demise. There’s a chance that Blizzard has still not fully ruled out the possibility of such a title, and that’s a pretty exciting thought.

Why Developers Shouldn’t Lay Off Employees After Launch