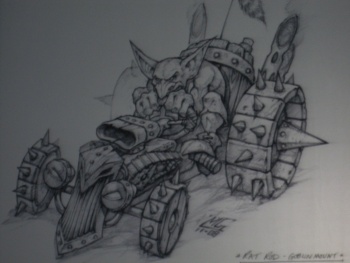 With Cataclysm, the world of Warcraft has been forever changed. The third expansion will feature two new races joining the fight, and an old villain reshaping the face of Azeroth itself.

Four of the biggest minds behind World of Warcraft – loremaster Chris Metzen, lead designer Tom Chilton, and world designers Alex Afrasiabi and Cory Stockton – took the stage at Blizzcon 2009 to give a deeper look at WoW: Cataclysm, the recently-unveiled third expansion pack for the world’s biggest MMORPG.

Now It’s Personal: With Wrath of the Lich King, said Metzen, the team learned that it was important to focus on a primary villain. Burning Crusade‘s Illidan was a “kickass badguy,” but he wasn’t in your path and came out of nowhere for his Black Temple. In contrast, the Lich King was omnipresent, and in characters’ faces since Level 70. They wanted to give players a personal reason to kick his ass, and they’re carrying that philosophy into Cataclysm – with classic Warcraft nemesis Deathwing.

Deathwing, who debuted in Warcraft II: Beyond the Dark Portal, was an ancient dragon and guardian of the Earth, who was driven mad by the whispers of the Old God chained beneath Azeroth. His power began to rip him apart, with his blood running with lava, and his agents were forced to brand iron plates onto his hide to hold him together. Though Deathwing was sleeping beneath the earth in Deepholm, the elemental plane of earth, he awakens – and his explosive eruption back onto the plane of Azeroth is the Cataclysm. With tsunamis, storms, and volcanoes, no part of Azeroth is left untouched – “Well, maybe Westfall,” joked Metzen. Deathwing is, in fact, the Worldbreaker.

New Alliance Race – Worgen: The people of Gilneas barred themselves up beyond the Greymane Wall to protect themselves from the Scourge and the plague in Warcraft III. However, Archmage Arugal (known to players from Shadowfang Keep) brought the curse of the Worgen to the land, and it made its way past the wall. In the early Worgen levels, it will be “back in time” to the era of WC3, seeing how the curse affected their society – and then it will jump to the present day, with a fully-transformed nation of Gilneas. Metzen posed the question: “Are the Worgen from somewhere else, or they from somewhen else?”

These are Victorian-era werewolves, “the ‘Wolverine’ of the Alliance.”

New Horde Race – Goblins: The Goblins have been part of the Horde since WC2. They hail from the Isle of Kazan, and are split up into factions and “cartels,” like other races have tribes or clans. The Goblins that join the Horde are not the neutral Steamwheedle Cartel (of Booty Bay and Gadgetzan), but rather the Bilgewater Cartel. They are shipwrecked on the Lost Isles near Durotar and Azshara, and do not start as a Horde race – they’re forced into it.

As opposed to the “Wolverine” Worgen, the Goblins serve somewhat as the “comic relief” for the Horde. Metzen cautioned everyone that they would need it – because there were “some dark days ahead.” We got a look at the Goblin mount, which looks like a little go-kart, complete with rockets.

The Worgen and the Goblins have their own racials – Worgen will get something like a sprint, (Chilton dryly remarked that he predicted “World of Worgencraft” complaints) while Goblins wear rocket belts that will let them make short jumps to the side. Worgen will be able to be all classes in the game except for Paladins and Shamans, while the Goblins are prevented from being Paladins or Druids.

Metzen repeated his warning – that there were dark days ahead, and in those dark days, the call for heroes was the most desperate. The campaign against the Lich King has been taxing, and though “The Lich King will get what’s coming to him… we’ve left part of ourselves up in the snow – it’s not coming home again.” For the soldiers of the Horde and the Alliance, the world is not what it was, and new stresses between the Alliance and Horde move the world closer to open war.

The war is returning to Warcraft, and we saw a screenshot of the front of the Horde capital of Orgrimmar clad in heavy iron – a fortress built for war. It isn’t just the classes and races that were changing, but the entire world. Stick around for the Cataclysm Preview, Part II, as we take a look at the new zones to come, and how the existing world will be reshaped.