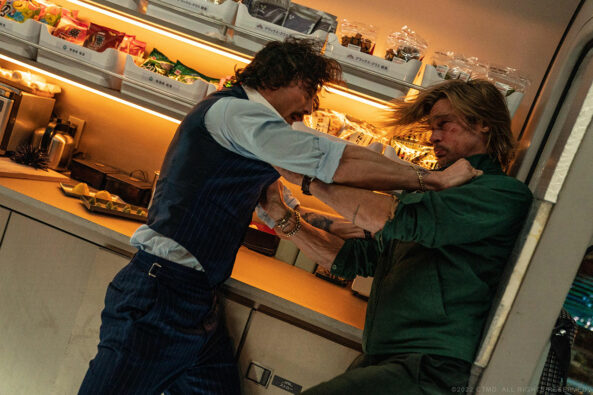 David Leitch is rapidly ascending the action film directing ladder. Since making the transition from stuntman to director with uncredited work on John Wick, the guy has put out a series of great action movies including Atomic Blonde, Deadpool 2, and Fast & Furious Presents: Hobbs & Shaw. Now, with his new film Bullet Train, he’s pulling a Chad Stahelski and delivering an action film with the man he previously stunt doubled for, Brad Pitt. The first Bullet Train trailer dropped today.

The film takes place mostly on a bullet train in Japan where a group of assassins and ne’er-do-wells are trying to get to a mysterious suitcase (doesn’t get more MacGuffin than that) while the train speeds through Tokyo and the Japanese countryside. There may be a bit more to the plot, given Pitt seems to have some sort of strange background. However, the Bullet Train trailer is clearly focusing on the action and fight sequences that Leitch has set up, with a bit of tongue-in-cheek comedy thrown in. The director knocked these kinds of tight-space action out of the park in Atomic Blonde and has been coordinating action sequences for decades, so these scenes should be pretty awesome.

The cast for the movie is stacked. Aside from Pitt, there is Sandra Bullock, Joey King, Aaron Taylor-Johnson, Brian Tyree Henry, Andrew Koji, Hiroyuki Sanada, Michael Shannon, and Benito A Martínez Ocasio. The screenplay is written by Fear Street Part Two: 1978 writer Zak Olkewicz and is based on the book Maria Beetle (published as Bullet Train in the U.S.) by Japanese author Kotaro Isaka. The novel is pure, trashy, wonderful thriller, and that looks like what we’ll get here as well.

Bullet Train will release in theaters on July 15.