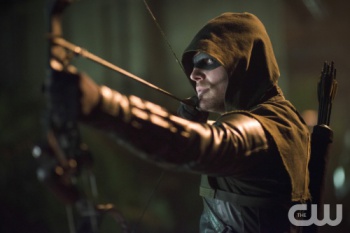 With no new Arrow episode this week, we’ve taken a look back at season 3 so far to pick out the greatest scenes!

After last week’s run-in with obsessed fan Cupid, Arrow takes a week off for Thanksgiving before returning in a two-part crossover special with The Flash. The special event begins December 2 at 8/7c on The CW with “Flash vs. Arrow”, and concludes at the same time on December 3 with “The Brave and The Bold”. Following the two hour event, both series will go on hiatus until the new year.

To keep you from going wild with anticipation for the showdown between Barry and Oliver, and inevitable clash with Captain Boomerang, I’ve gathered up the best scenes in the season so far. From all the fight scenes, cheesy lines, and angsty break-ups, I’ve narrowed it down to the five most outstanding, most hilarious, and most action-packed parts of the season.

Spoilers ahead for episodes 1 through 7 of Arrow season 3, folks! 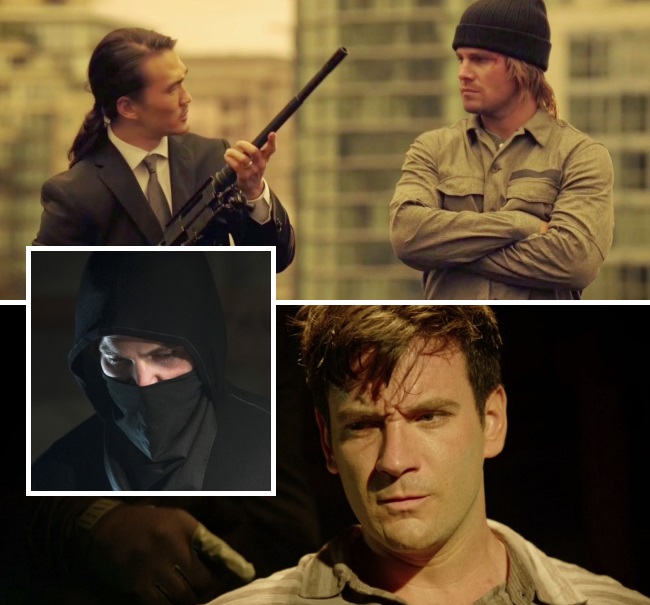 In flashbacks, we learn that one of the first tasks that Amanda Waller sets for Oliver while he is in Hong Kong is to assassinate his best friend, Tommy Merlyn. Tommy has come to Hong Kong because of Oliver. When Oliver dashed away from Waller and her men and tried to send an email to his family, it triggered a notification that Oliver’s email account had been activated. Confident that Oliver is still alive, Tommy immediately headed to Hong Kong to track him down. Waller prefers the world thinking that the young billionaire is dead, so she orders Oliver to take care of the problem.

The creative problem-solving that Oliver displays in the flashback scenes in “Sara” shows us The Arrow’s best traits. In his effort to avoid killing his friend, Oliver concocts a complicated kidnapping scheme. One he has captured Tommy, he convinces him that the activation of Oliver’s email account was a ploy to draw out a wealthy individual to ransom, hopefully one of the Queen family. Oliver’s handler, Maseo Yamashiro, helps him with his charade, playing the part of local police who rescue Tommy. It’s a short but very cool illustration of the kind of person Oliver is, and the trouble he’ll go to in order to protect his friends. It’s also nice to see him developing creative ways to solve problems without killing, which was the overarching theme of season two. The flashback scenes really sell the stress that Oliver is under, adding a lot of painful depth to his conversations with Waller last season. Perhaps more importantly, these scenes tell us a lot about who Maseo Yamashiro is. Maseo is willing to work with Oliver on creative solutions, to seek mutually beneficial results, and he’s willing to trust Oliver enough to agree to the kidnapping hoax. It shows us how different Maseo is from Waller, and it establishes the bond between Maseo and Oliver that we’ve seen in later flashbacks. 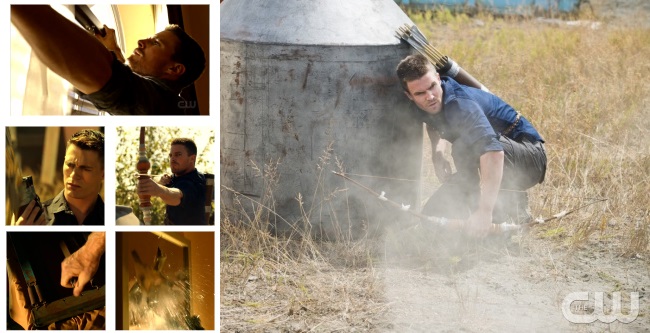 In what is otherwise a lackluster episode, there is one moment that stands out to me as brilliantly hilarious. Unable to bring his weapons with him to the island country of Corto Maltese in his quest to track down Thea and assist Diggle with a simple assignment for A.R.G.U.S., Oliver constructs bows and arrows in the most MacGyver-y way possible: using bits and pieces of his hotel room. Now, we know that Oliver is no stranger to trashing hotel rooms, but this is probably the first time he’s done it in order to fight a black market info-broker. With the help of duct tape, he assembles his arsenal out of pieces of broken glass, decorative grasses, table legs, and parts of the blinds, somehow ending up with functional weapons.

This skill, the ability to create what he needs out of what is around him, is as astounding as it is hilarious. Making a good bow and arrow isn’t easy, and it makes me wonder where Oliver learned this resourcefulness. This is the first time we’ve seen Oliver build a bow. On the island, he used Yao Fei’s bow, and his latest bows are beautiful works of modern construction. Did he spend some time in Russia scrounging and scraping equipment together while learning the language and becoming a Bratva captain? He certainly doesn’t seem to be all that resourceful while in Hong Kong. He can’t even do his own laundry! Still, I love the way the bows and arrows are revealed so dryly, with a few fast cuts back to the hotel room. Even if it is a little ridiculous, it seems like the kind of thing Oliver would go out of his way to learn. 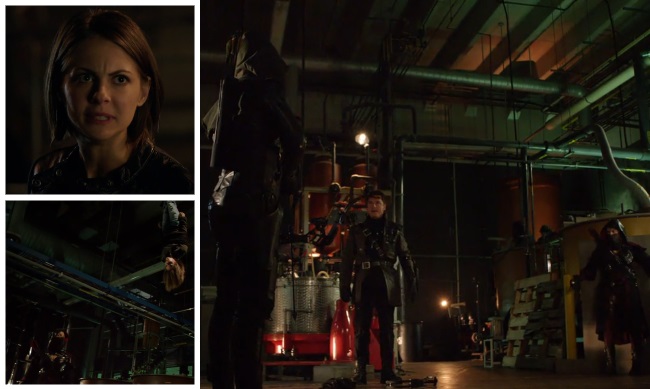 Thea’s Kidnapping and Rescue in Episode 4: “The Magician”

Desperate to draw out Malcolm Merlyn, Nyssa kidnaps Thea in front of Roy. Unable to fight Nyssa without revealing her new martial arts skills to Roy, Thea submits without a struggle. The sheer volume of frustration, calculation, and aggression that actor Willa Holland delivers in the mere moments of this scene is staggering. It’s the best moment for her character so far in this season. It’s painful watching her realize that she has no choice but to be a victim in this situation in order to maintain her lies.

The kidnapping leads to the best action scene so far. Oliver arrives as The Arrow to free Thea and take on Nyssa. Their speedy, violent fight moves them through the steamy, dark warehouse, until they are interrupted by the very person Nyssa was trying to draw out — Malcolm Merlyn. What follows is a breath-holding, arrow-flinging, three-way showdown that culminates in the best monologue I’ve seen from a TV villain. When John Barrowman lays out all the reasons to believe he’s not Sara’s murderer, it’s like his lines were lifted from the pages of comic books. Barrowman convincingly delivers every line, and this moment sets up the conflict that will come back in full force later this season: the wrath of Ra’s al Ghul. When my expectations for the show had been flagging, this scene is what got me excited again for Arrow.

As a bonus, we also get a little moment from Roy that made me burst out laughing. His impressive flip when Nyssa arrives to kidnap Thea is quite rudely interrupted by her tranquilizer dart. Roy continues to waver between fully fledged vigilante and comic relief. Don’t worry, Roy, your flip will work eventually. 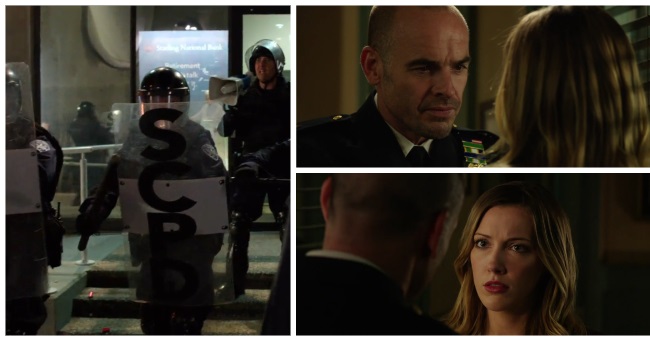 Laurel’s Mistake in Episode 5: “The Secret Origin of Felcity Smoak”

In an episode that was a fantastic exploration of Felicity’s character, one moment starring Arrow‘s other leading lady stands out to me. After the hackers start threatening everyone’s bank accounts, an angry crowd begins to gather at Starling National Bank. The crowd is demanding to take out their money, and the atmosphere begins to teeter on dangerous. At the same time, Laurel Lance arrives at the police headquarters. The District Attorney is unreachable, so she’s the acting D.A. for the crisis. She decides to deploy a riot squad to the bank, but instead of restoring order, the squad only makes things worse. The Arrow and Arsenal have to step in to keep the crowd from turning deadly.

After the fighting has died down, Quentin Lance chastises Laura for her actions. Sending in the riot squad was outside of the scope of her authority, and beyond that, was a terrible choice given the situation. This little scene really highlights the core conflict happening with Laurel this season. She’s angry over the murder of Sara, but that rage is repeatedly being used to lash out violently at any problem, regardless of the best solution. Her first thought is always to meet force with force, and if she keeps at it she’s likely to get herself killed. From arriving with a gun to kill Simon Lacroix in “Sara” to taking on the abusive boyfriend of a AA member in “Corto Maltese”, Laurel is demonstrating just how desperately she is in need of guidance. It’s also an interesting parallel with Olvier’s relationship with Roy. After Roy was injected with Mirakuru in season 2, Oliver decided that he needed training to help him deal with his anger and to overcome the dangerous mental effects of the drug. Instead of helping Laurel deal with her rage, Oliver has repeatedly chosen to push her away. When he chose to push Roy away, Roy ended up falling into the hands of his enemy. Hopefully, after the events of “Guilty”, Oliver has begun to realize exactly how much Laurel needs his support. 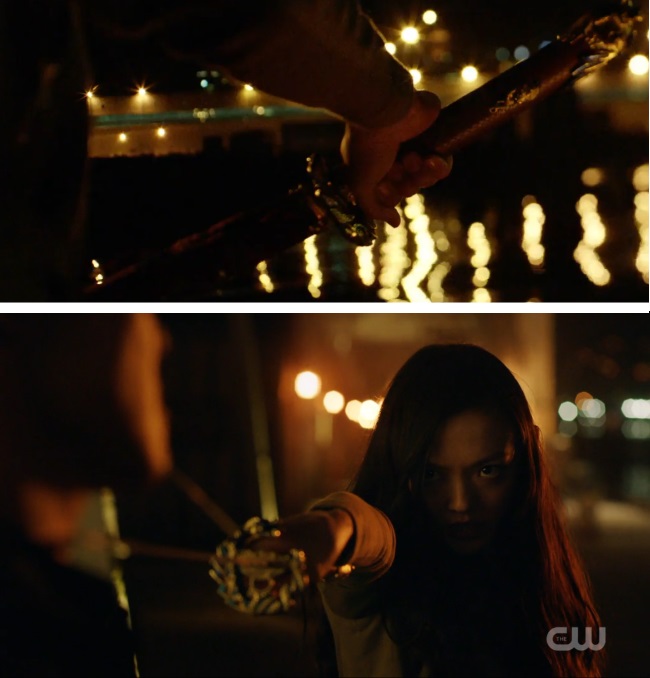 Tatsu Explodes in Episode 7: “Draw Back Your Bow”

In a flashback to his time in Hong Kong, a bullheaded Oliver goes along with Tatsu when her husband fails to return from what was supposed to be a simple meeting with an informant. A group of Triad gang members are meeting on the docks, and Oliver takes the direct approach to asking them about Maseo’s fate. It looks like Oliver is about to be a permanent resident of the dark water under the docks when Tatsu dashes in, her katana shining in the low light as she cuts apart the mobsters. Not only is it a great short action sequence, but it’s nice to see Oliver being the one needing a rescue.

This flashy fight scene is the first proof we have that Tatsu is more than the quiet housewife we’ve been seeing all season. In the comics, Tatsu is known as Katana, a hero who has fought on with the Outsiders and the Birds of Prey. In Arrow, Oliver’s flashbacks to Hong Kong have hinted that Maseo and Tatsu are more than what they seem, hiding a dark past that drove them from Japan and somehow involves A.R.G.U.S. and the villain Chien Na Wei (China White). Will Tatsu train Oliver in the use of the katana? He may need it if he ends up dueling Thea, who spent the last six months training with swords under Malcolm Merlyn’s supervision. Now that would be a fantastic fight!

What do you think? Was your favorite moment on the list? Let me know in the comments!