Right, before we begin I feel I need to address the issue that I may have said something offensive to the transgender community in last week’s video. For a while I was confused over what, specifically, was causing offense. ‘Cos some people said it was the image shown in the video thumbnail of the booth from Papers, Please with a sign over it saying “No trannies”. But that was a reference to the game mechanics – you are literally required to turn away people who look like one gender when their passport says another, because you work for an evil and very politically incorrect dictatorship. The image was taken out of context. I appreciate that ‘trannies’ is a pejorative word, but I hasten to reiterate that it was written on a sign erected by a fictional evil dictatorship. I am hopeful that this world is not so mindlessly knee-jerk that one is condemned solely for the utterance of a Forbidden Word, regardless of context or intent, because I don’t see how that helps. It’s like forcing a public figure to resign because they used the word ‘niggardly’.[1]

I suspect, though, that the image was latched onto because it was more visible, and the actual problematic remark was one from earlier in the video along the lines of “‘Co-op single player’ is like saying ‘I’m not gay, I only suck off pre-op transsexuals'”. And that one I do regret, in retrospect. It was supposed to be a joke about cognitive dissonance, that a man in denial about being gay would seek out things with penises attached that aren’t necessarily men, but I realise now that this was a poor choice of words, because some people who identify as female have cocks. Lord knows I have nothing to gain from enforcing gender roles, ‘cos I don’t like cars OR football. I should probably have gone for something like ‘I’m not gay, I only suck off pantomime dames.’

So I apologise for my lazy wording. I regret the fact that it got in the way of the intended message, which was that Papers, Please is really neat and you should check it out, however transphobic its fictional evil dictatorship may be.

Has Papers, Please created an entire new genre: the bureaucracy-em-up? I wonder about that. If it could be said to belong to an existing genre, then it would probably be whatever genre Trauma Center is. They’re both about going through a procedure in a professional setting with massive pressure being put on you by a time limit and the context of what you’re doing. And come to think of it, both of them have a bomb disposal sequence out of nowhere. Huh. Strange parallel.

The difference is that the paperwork sorting in Papers, Please isn’t actually the meat of the experience. It’s the context of the rest of the game that makes it for me. The gameplay itself is deliberately soul-crushingly banal. The notion that your decisions have the power to make or break the lives of these desperate innocents lining up for hours in the freezing cold – not to mention the dire consequences that await you if you displease the state – creates an underlying tension that fuels the face-pulling tantrums every time a citation comes up. I would argue that the core, essential gameplay may not be the document checking itself, but the moments when the routine breaks and you are pressured into deciding whether to stick to the rules or try to do the right thing.

So yes, it’s pretty involving stuff. And particularly important because it’s a solo project by developer Lucas Pope, inspired by events in his own life. The usual argument against games being art is that they’re made by far too many people to be considered auteur-driven (a similar argument was made against films in the past, but I digress), in which case, solo developed games must be pretty cut and dry as far as counter-examples go.

[1] Which derives from the archaic word ‘nygart’, meaning a stingy or miserly person, and is entirely unrelated to certain racial slurs, but I’m sure you all knew that 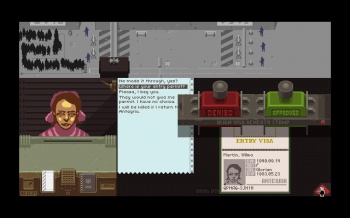 I must say, though, if Lucas Pope isn’t currently looking into ways to port Papers, Please to a tablet device, then he bloody well should be. The gameplay’s almost entirely click-drag, absolutely tailor-made for touchscreens. What would be even better would be a platform with a dual screen arrangement, like the DS or Wii U, so you could look up from sorting papers to peer suspiciously at the fidgeting pleb trying to look innocent on the other side of the glass.

You know, now that I come to write all this down, while it’s still the larger context that makes the game good, I think there’s also an intoxicating appeal in being in a position of petty authority. We’ve all had to jump through some sodding hoops to move to a new apartment, so it’s strangely satisfying to get to be the one sending everyone back for more proof of income documents.

So all I can say is “More Papers, Please, please”. It’s got a decent skeleton of gameplay down that can be easily transferred into new settings with slightly different rules, and there’s enough flexibility to explore new mechanics within the same model. So with that in mind, I’d like to make a suggestion for a possible sequel to Papers, Please: The same thing, but set in Hell.

Specifically you’d be in the role Midas fills in the Divine Comedy; the judge at the entrance to Hell who decides what circle every incoming damned soul will be condemned to. So you’ll still have the gameplay where you check for discrepancies in the paperwork – watching out for forgeries produced by Orpheus-types trying to sneak into the underworld to rescue their loved ones, the selfish pricks – but you’d also have to make the call on which circle every poor bugger ends up on.

This will start off fairly straightforward – shagged the neighbour’s wife, you go to Lust, died of a heart attack while straining under the weight of your salad plate at Sizzler, you go to Gluttony – but people lead complex lives and commit complex mixtures of sins, so you’ll have to make a call on which sin is the most prevalent when more than one is in evidence. Like, what if someone died from eating junk food out of the orifice of a loved one? Is that a Lust or Gluttony situation? Personally, I’d think Lust was the prevalent one there, ‘cos I doubt that that was a serving method intended for enhancing the experience of eating the food.

And you could also have the more and more infuriating bureaucratic rules over time. Like maybe particular circles would be closed on particular days and you’d need to come up with broad interpretations of sins to justify damning people elsewhere. So maybe Lust is closed but we’ve got someone who shagged their neighbour’s wife. Well, that’s a betrayal of the neighbour’s trust, isn’t it? There was a place for Betrayal, wasn’t there? It’s been a while.

This game will not only continue the grand tradition of Papers, Please, but will also provide a much-needed juxtaposition to the last time Dante’s Inferno was adapted into video game form. Maybe fix Midas’ image a wee bit by making him less of a giant snake monster getting his face split open on a wheel. Maybe there could be a funny joke where Dante shows up at the booth with forged papers and then he tries to kill you by slamming your face down on the pen holders on your desk until you politely ask him to leave.