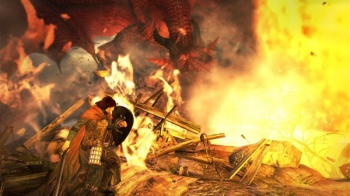 Capcom’s willing to let you check out Resident Evil 6 early, but only if you shell out for a copy of Dragon’s Dogma.

Resident Evil 6 isn’t due out until November, but the publisher’s willing to let you play a demo ahead of time. How? Well, you’ll have to buy Capcom’s other much-hyped game, Dragon’s Dogma.

Each retail copy of Dragon’s Dogma will include a code that can be redeemed for an early demo of Resident Evil 6. Now, the official release date for the PSN demo is September 4th in North America (September 5th in Europe), but Xbox Live users will be able to redeem said code for the demo on July 3rd. Exactly why XBLA users are getting the game so far ahead of their PSN brethren hasn’t been explained. Additionally, it’s not obvious right now if Capcom’s planning to give the demo a regular release.

Capcom’s got a lot riding on Dragon’s Dogma, unsurprising since the game was being developed by the publisher’s largest development team ever (until Resident Evil 6 got a bigger team, that is). As a result, Capcom is hoping to sell at least 1.5 million copies of the game worldwide, which is a tall order for a brand new game IP. As a result, it makes a certain amount of sense that the demo’s being used as the lure to tempt more gamers into open their wallets.

Also, pre-ordering the game from different retailers will net different in-game rewards. GameStop has a “Pawn Upgrade Pack” that will let you rent more powerful AI companions to help you on your quests. Best Buy, meanwhile, has the “Armor Upgrade Pack” and Amazon is offering the “Weapon Upgrade Pack.” According to Capcom, these pre-order bonuses “will deliver higher level armor and weapons respectively giving players a real advantage when tackling the toughest of enemies.”

Dragon’s Dogma is due out on May 22nd in North America and May 25th in Europe.