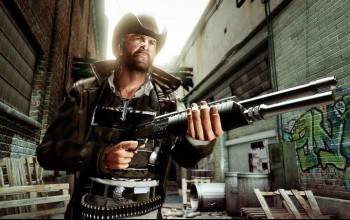 Police in Texas are unhappy with Ubisoft’s upcoming Call of Juarez: The Cartel, which they say glorifies drug-related violence in Mexico and could even help push teenagers into the lifestyle.

Not much is known about Ubisoft’s plans for the next Call of Juarez game except that it will take the series out of its wild west roots and drop it into the modern day instead. But that’s enough to earn it a thumbs-down from law enforcement in Texas, where the game’s apparent tie-in to the ongoing cartel wars in Mexico seems to have struck a nerve.

“Unfortunately there are companies that are looking to capitalize on the violent situation in Mexico which has had a very negative impact on the country,” Brownsville Police Chief Carlos Garcia told the Brownsville Herald. “There have been spillover cases in certain areas of our country with cases of kidnappings and murders. This is a serious topic and this is just another violent video game.”

“It doesn’t matter if it deals with the cartel in Juarez, the Gulf Cartel or the Sinaloa Cartel. It is simply not something that is appropriate for our youth,” he continued. “This leaves lasting images and ideas in teenagers who get caught up in the game and may try to make it a reality and live the violent lifestyle they see in these games.”

Cameron County Sheriff Omar Lucio said he’s not familiar with the game but that the title “leads one to believe that the game deals with narcotic trafficking organizations.” He echoed the idea that the game could leave impressionable teenagers with some very wrong ideas about drug cartels, which could lead them to imitate what they see in the game. “Sadly enough these kind of games are protected by freedom of speech, but the violence that comes from cartels is not a game and it affects us all,” he added.

Unlike Sheriff Lucio, I don’t find it sad that videogames are protected by the same First Amendment rights enjoyed by books, movies and music. The real-life cartel violence in Mexico is abhorrent but once again the idea that not all games are for all ages seems to have been lost in all the noise. I also find myself wondering how the Sheriff feels about similar claims directed toward games like Modern Warfare, which in the past have faced accusations of being subtle recruiting tools for the U.S. military. Would he agree? And if so, would he he as critical?

Call of Juarez: The Cartel is currently slated for release on July 1 for the Xbox 360 and PlayStation 3.