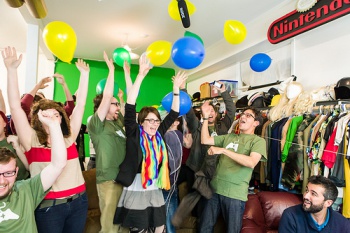 The entertainment business is pretty small. It’s not that strange to imagine Brad Pitt chatting up Tyler Perry, or MC Hammer appearing on stage with Psy. Even so, seeing one of science fiction’s most recognizable personages shout out the Loading Ready Run crew as they play Desert Bus for Hope to raise money for charity is – for lack of a better word – awesome. Last night, William Shatner – Yes, the William Shatner, Captain Kirk on Star Trek – clicked on the Desert Bus website and liked what he saw, engaging with LRR as they passed the $1 million mark for total funds raised in the history of Desert Bus. Shatner even liked their “Gangnam Style”.

@desertbus Hello to all of you!— William Shatner (@WilliamShatner) November 20, 2012

Understandably, Graham, Paul, Kathleen and company were all very excited and replied with an enthusiastic “Hello!” Shatner pulled a classic and asked “How you doing?” before Desert Bus thought they spilled the news that they had just passed the $1 million mark. TO everyone’s surprise, Shatner admitted to watching their antics for some time.

“@desertbus: @williamshatner We’re pretty excellent, we just passed $1M for lifetime funds raised!” I was watching when the $40 put you over— William Shatner (@WilliamShatner) November 20, 2012

Of course, that meant he had seen the huge crowd of Canadians dance to Psy’s “Gangnam Style” with the requisite dance moves, which caused a few blushes. Shatner took it all in.

“@desertbus: @williamshatner I have to say, we’re a little embarrassed that you saw us “Gangnam Style” =O” that’s the price of being online.— William Shatner (@WilliamShatner) November 20, 2012

The man who played Captain Kirk – and does a pretty fantastic reading of Elton John’s “Rocketman” – ended the conversation at 1am ET with an incredible endorsement of everything Desert Bus:

If you are online looking for an interesting experience; try surfing over to: desertbus.orgMBB— William Shatner (@WilliamShatner) November 20, 2012

Desert Bus is still going strong, with at least three more days until they finally stop playing the dang game. Head over to the website to check out what the crew is up to now, and don’t forget to donate to Child’s Play along the way. There’s tons of awesome gaming and geek related stuff they are auctioning off, plus Yahtzee and MovieBob will be calling in this evening.

Consoles Are a “Massive Barrier” for Crysis 3 Development